Tarot Meditation For The Moon Upright

Meditation For The Moon – Upright

We all reach a point in our lives where we have to question everything. We aren’t sure what is or is not the facts, and it is during that time we start learning who we really are by the answers we find to those questions.

Prepare your meditation space, with the card upright on the orange meditation cloth, and the matching candle at its peak. As you start fading into the meditation, let your mind and emotions be filled with questioning.


Let your soul be unsatisfied with safe, textbook answers, let all things be filled with wonder and speculation.

Your inner eye opens on a simple dirt path heading down a lightly forested hill, winding into the distance. Overhead the moon shines its light down, casting odd shadows and shapes over the terrain, and disguising the nature of much of that which lays before you. 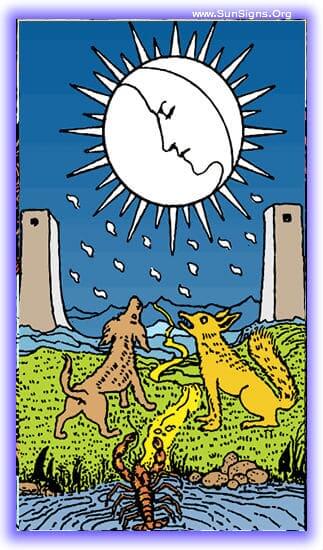 As you walk down the path you are joined by a hulking man, his clothes unkempt, his beard and hair wild. His very presence sets you ill at ease, and no less so the stench of long travels unwashed that are about him.


There is a heavy thud every time his walking stick hits the ground. He looks at you with staring eyes and a gap-toothed grin that sets you ill at ease.

He says not a word, but walks down the path with you, making your skin crawl. You try not to be too obviously distant from him, not knowing what will set this wild vagabond off.


As you come around a curve in the path, you hear the sound of something eating hungrily. On the side of the road you spot a rabbit, devouring every bit of grass it can reach, it has already cleared a large patch of ground, and is continuing to eat.

Your companion stops to watch it carefully, and suddenly his stick flings out and crushes the rabbit’s skull. You look at him with a kind of mixed horror as he picks up the rabbit, and dumps it into a bag wordlessly, just looking at you with mad eyes that make you wonder if you’re next.

Still you wander, and pass another corner. On this corner there is a badger scowling angrily, growling and bristling in the middle of the road. You look to your unwanted companion, and see him carefully examining the situation again. He steps off the road to the right and walks around the badger, motioning for you to follow.

You come to a small clearing, where he builds a fire. He looks to you as he does so, and takes out a small silver cross that was hidden inside his robes.

With reverence he removes the rabbit from his bag, and digs a hole to bury it, saying last rites over it as he does so. He looks up at you, explaining that he is a priest of St. Assisi, living his life in the wild to be closer to those his Saint protects.

The rabbit, he explains, suffered from a disease that made it constantly ravenous, and the creature would have eaten until it ruptured it’s stomach, leaving it to die a painful death.

The badger was protecting its den, which lay off the road just to the left of the road. He explains that in many things, especially nature, it takes a broad eye to understand the implications of what seems obvious on the surface.

With that, he offers to let you join him in a meal of foraged plants from the woods and hills, and to talk more of his experiences in nature. You may join him if you wish, or move on if you feel that is your need.

When you are done here, leave the tarot meditation on the moon card and record your thoughts on the events that unfolded in your journal. Remember that not all is as it first appears, and it is well worth careful consideration to understand the inner workings behind things.