Even before 1621, turkeys had been closely tied to Thanksgiving, and symbolized abundance among the Native American population in Northern America. The turkey animal totem has long been revered by Native Americans for its purported fertility, and was often sacrificed during ceremonies that celebrated fertility, gratefulness, and bounty. Some tribes would even give turkeys to other tribes as gifts, presents and offerings of community.

Many of these rituals are still in practice today, and though the tribes have changed over the years, the guest of honor, the turkey, has remained a constant through time. Many ancient tribes around the world have honored the turkey spirit guide for its close connection with nature and its inherent value for sustenance and nourishment.


The turkey spiritual totem always stands as a reminder for man to develop and maintain a harmonious relationship with the land and environment. It asks them to consider them the foundations of wellness and sustenance. It symbolizes the balance between giving and receiving to find contentment in what man already possesses. 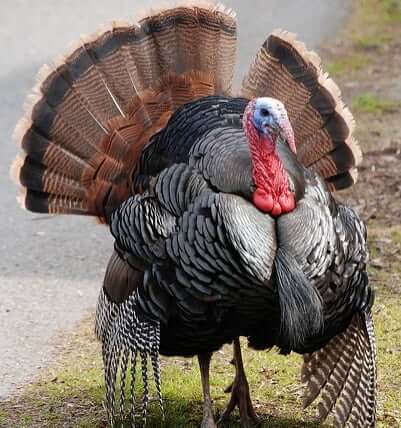 Many world cultures consider the turkey animal spirit to be a sacred animal, and recognize the bird for its attractiveness, and its over-confidence, arrogant and conceited nature. Alchemically speaking, the turkey symbolizes such traits as generosity, virility, sacrifice, and awareness.


Additionally, the turkey animal totem is said to epitomize the symbolization of masculinity, self-adulation, vanity, and hubris. These characteristics can be attributed to the behavior of male turkeys in the wild. They parade about, their magnificent plumage displayed vainly in the attempt to capture the attention of all the female turkeys, as well as the vying male turkeys.

Many ancient and less sophisticated cultures noted the turkey would alert them to adverse weather conditions by becoming agitated and flustered. In fact, many saw this behavior as a symbol of forecasting and foretelling of what sort of weather was to come. The turkey symbolism also dictates that man feels content in life with what he has, and does not lead a life where the accumulation of belongings begets happiness.

A little known fact about the turkey symbol is that it is at its prime strength in the autumn months, as this is its peak season. Due to this fact, the turkey has additional characteristics that coincide with the fall season, such as the cycle of the seasons. It also stands for nourishment in daily life, harvesting the fruits of man’s efforts and work, beginnings and endings, the importance of community, satisfaction, a connection between human kind and Mother Earth, and an attention to preparation.

Placing a large emphasis on community, the turkey animal spirit has always seemed to impart the importance of sharing and generosity. It shows the wisdom to always pay close attention to the people in our lives; be they family, friends, coworkers, or society as a whole.

The turkey animal totem is always a valiant reminder of the fact that man should maintain gratitude for the advantage of each new day and the potential it brings. It also shows us that that man must consistently convey his strength and brilliance and always remain true to one’s self. The turkey symbolism encourages us to visualize beyond what our immediate and personal needs are so that we can facilitate a sustainable relationship with Mother Earth and the people around us.