Tarot Meditation For The Hierophant Upright

Meditation For The Hierophant – Upright

This meditation will focus on the Hierophant tarot card of the Major Arcana, the leader of traditions, the benefits of societies, and the key to the conscious and subconscious.

He stands seeding the raw power of the universe down to the world, using religion in all its forms. Set a lavender candle on a matching meditation cloth, or a simple white cloth will do.

As you focus, think on religion, communities, spirituality, and the connecting force of the conscious and subconscious. You will feel yourself settle down into a kneeling position in your meditation, and above you, will be seated the Hierophant. See his triple crown, representing the three realms, the spiritual, the conscious, and the subconscious.

You kneel before him in supplication, awaiting his wisdom, that he distills down from a source higher still. You know that once he knelt where you are, took the traditions as you did, said the same oaths, and began the same path. 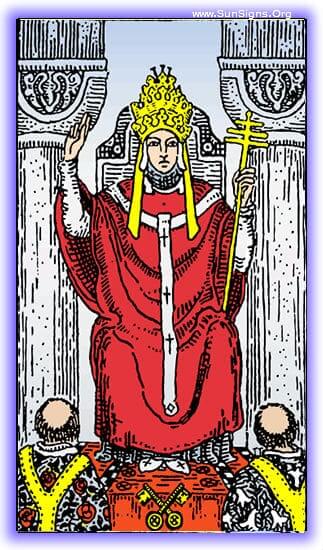 Was he as bewildered as you are now? As eager, ready to receive this knowledge and serve the greater wisdom of the universe? Likely he was, for he is just as human as you are.

The Hierophant in upright position will speak to you, pontificating on the nature of the universe, beseeching you to take the oath.

He will ask you to make the same promises he did to ensure that the mysteries he gives you in sacred trust do not be given out lightly.

It matters not, you begin to realize, for the mysteries you are learning are experiential in nature. You could no more speak their truths to the uninitiated than you could describe Mozart to a man deaf since birth, nor give meaning to color to those who are blind.


He speaks to you of tradition, of his rebelliousness at your stage of life. He explains that it took him long to realize that while it is hard to see, there are none the less profound truths to life. There are paths that are tried and true.

And they are known to work from generations of effort. But he charges you to also keep your mind open, to focus on new experiences. If for no other reason than what we think to be true, may not be, but to keep always to your promises.

Among these promises is to keep to your brothers in the order. You serve the same Master or Mistress, and you must always remember that it is each other you must be able to rely on.

He then turns to you, eager to learn from you as well as you from him. He asks you to ask your questions, and he will do his best to answer them.

This tarot meditation is one of the most direct, and has the ability to provide many answers to the questions that lay within its purview. As the questions end, you will rise out of the meditation, be prepared to write the answers to any questions you may have within your journal.