Tarot Meditation For The Hierophant Reversed

Meditation For The Hierophant – Reversed

This tarot meditation on the Hierophant card in reversed position will focus on rebellion, breaking of tradition, and the Hierophant having left the path of wisdom.

You will take the red cloth and lay it before you, representing war and aggression, you will place a red candle off the cloth and to one side, as well as any incense that seems woefully inappropriate for the setting. Place the tarot card not reversed, but toss it irreverently onto the cloth.

Settle into the meditation, and feel yourself slowly surrounded by a room full of thick cloying incense, the loud raucous laughter of undisciplined youth singing loudly and drinking heavily.


The Hierophant is seated at a chair in disheveled clothes, his crown sits off to one side, his hair is tangled and unwashed. His scepter is not held, but leans against his chair, bearing the patina of poor maintenance. The room itself has gone long without seeing care. 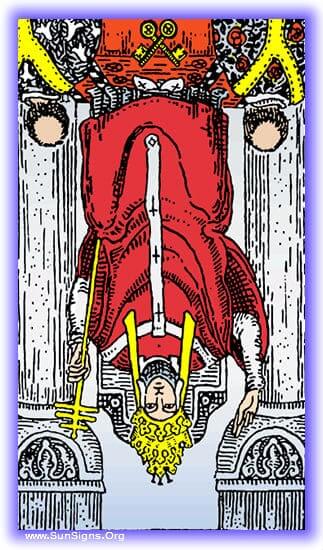 He calls forth two of their number without ceremony, they come to him, stumbling drunkenly down the path. He motions to them dismissively, mumbling some disorganized and rambling words of ordination, and admits them into the order of the drunken fool.


Behind him is a symbol, now much tarnished but once revered, of a noble figure, decidedly not a fool, and you begin to understand that after having been placed in his care, he has fully perverted the meaning of this place.

None of the old traditions have been held up, and it is obvious that this once holy place is suffering for his indiscretions. The pupils are undisciplined, the ceremony shrifted, and all has begun its fall to ruin.


Why has he done this thing? Looking at him, you see it is hubris. Hubris of a mind that believes that tradition is pointless and without meaning, that all the work of those that came before meant nothing.

Worst, that after many generations of keeping this place holy and pure, that they were all fools in believing in its principles, and what it stood for.

Pay attention to the follies here, the failure of the system when traditions are ignored. This is the hubris of broken tradition failing.

Watch for your warnings, for the message for you in this tarot card meditation, and when you begin to rise out of the meditation, make note of what seemed important to you.