The Saturn In Pisces: Significance and Meaning

The Saturn in Pisces people are very helpful and kind but will keep their emotions a secret.


The Saturn In Pisces: Personality

Being as sensitive as they are, Pisces sun sign tends to get personally involved in other people’s problems. So Saturn in Pisces can be depressed or negative when it comes to their general view of life. They have to learn to separate themselves from their social circle to compensate for that.

Saturn acts like an authority figure, placing limitations and restrictions on the choices we make. This causes Saturn in Pisces to question their motives and decisions. Thus they feel too self-conscious for their good. Add to that their dreamy tendencies and their sense of reality can become fairly skewed.

Because of this, they may feel paranoid that something bad is going to happen, and it’s a feeling that is difficult to shake. Saturn in Pisces has to work on developing a more positive attitude toward life in general. Or else their concerns can have damaging repercussions on their physical and mental health. 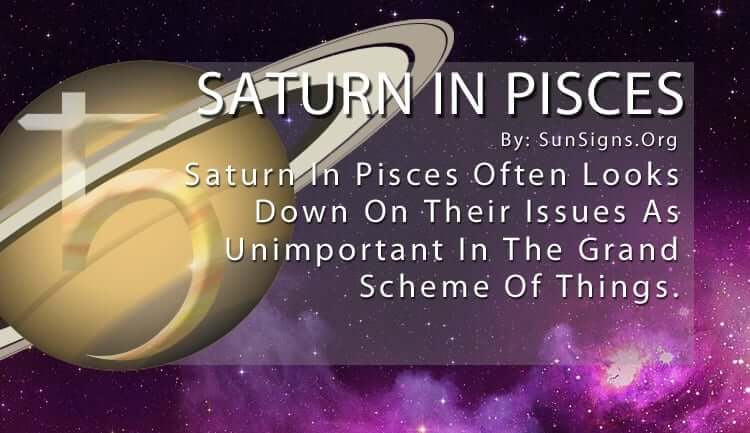 Positive Traits of the Saturn in Pisces

Saturn in Pisces is a great friend but at the expense of their health. It’s imperative they even out their helpful ways with some personal rest.

Go out for a day of fun or pampering with friends, and forget about the world for a while. It will be there whether you’re worried about it or not, so give your mind and anxiety a rest.

Allow your imagination to run wild and then go running with it. It’s part of what makes you a sensitive and creative individual. So, it’s important to exercise it and maintain it. Your mind shouldn’t be the enemy, so don’t let your fears rule your existence.


Negative Traits of the Saturn in Pisces

The main thing Saturn in Pisces has to work on is their self-doubt. While they are great at loving others and taking care of them, they do not handle the reverse that well. When people try to help them in any way they feel unworthy of such attention. They tend to keep their feelings while allowing others to burden them with their problems, making it a very uneven situation.

Because of this, the Pisces Saturn person often looks down on their issues as unimportant in the grand scheme of things. They have to learn to focus on their problems a bit more and find a balance between helping others and fixing their dilemmas.


They tend to sacrifice themselves for the good of their social network. But that only creates more obstacles for them to overcome in their personal lives. And when it comes to past endeavors, they rarely forget incidents that caused them trouble.

It’s difficult for them to let go of something that had a deep impact on them. “Forgive and forget” is not a part of their vocabulary, leaving them vulnerable to endless attacks on their psyche.

The intuition of the Saturn in Pisces alone is enough to help them get past difficult situations. But they have to believe in their gut feelings. They tend to have low self-confidence. This prevents them from taking risks which could offer great reward. They have to get past their insecurities and trust in their skill set.

If Saturn in Pisces can focus their energy on positive thoughts and outcomes, there’s nothing else holding them back but themselves. Go out and try something new. Exciting adventures await, whether they indeed exist or you make them up because you have the power to create whatever your heart desires.