The Saturn In Aries: Significance and Meaning

The Saturn in Aries people will think twice before taking any action. They will never act in haste.

The Saturn In Aries: Personality

Being brash and bold, Aries is not known for holding back. But Saturn in Aries realizes there are times when even they are not ready to handle a situation with unknown consequences. It’s a struggle that causes conflict with other people, and they have a hard time controlling their temper.

In astrology, Saturn represents a kind of father figure in our lives, something that tells us to hold back or places restrictions on things that we do. While Aries is all about taking risks. Saturn in Aries tends to look more closely at them and decide whether or not it is in their best interest to steamroll ahead. This person is not as much of a trailblazer as other planets in this sign, but that doesn’t mean they hold back all the time. 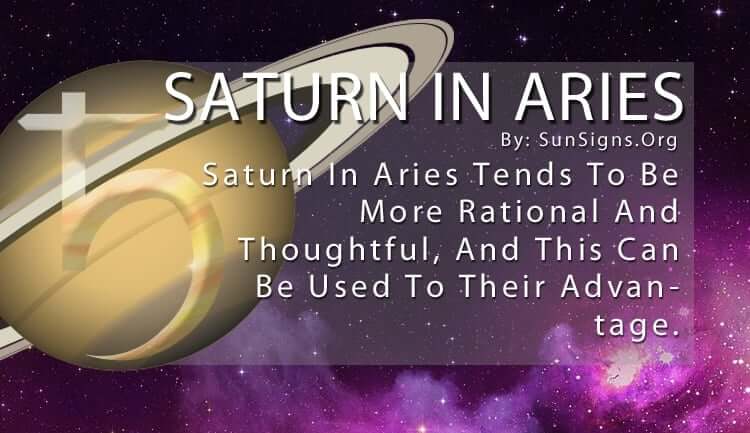 Positive Traits of the Saturn in Aries

Saturn in Aries tends to be more rational and thoughtful. This can be used to their advantage when they’re actively trying to get ahead in life. They can rely on their powers of persuasion to get their point across in a concise and effective manner to get what they want.

They create a different personality to deal with this kind of a situation. It will help them to develop the kind of social skills needed to navigate any complex problem or confrontation.

While Aries is often too straightforward for their good, Saturn in Aries allows them some restraint to avoid creating chaos or unwanted consequences. This can come in handy when finding a balance between risky opportunities and successful ventures.

Negative Traits of the Saturn in Aries

The Saturn in Aries people often get upset with themselves for not taking the risk and may throw themselves into a situation even worse than the originally missed opportunity. They lack the over-confidence of the usual Aries persuasion and get frustrated with their diminished sense of self. Their egos are not as inflated as the usual fire sign, leaving them safer but also feeling lesser than those around them.

This often makes Saturn in Aries more confrontational in a job or personal setting, because they feel they have to prove themselves. Because of this, they may show off their skills in a straightforward manner, making others uncomfortable at their obvious display of defiance.

The best way to tone down this mannerism is to practice their skill set over and over, so it becomes second nature to them. This way, they won’t feel inferior to their peers, and they will come across as more capable than desperate.

Saturn in Aries knows when it’s best to hold back. If they can build up their confidence in that skill, they can go far in life. They just have to avoid any feelings of insecurity or doubt that may creep up once the opportunity has passed. Maintaining their physical and mental well-being will help them to remain balanced in life and happy with the majority of their choices.

As long as Saturn in Aries views their cautious nature as a good thing rather than a detrimental thing, they will move up the corporate ladder or improve their situation a lot faster.

This placement of Saturn symbolizes that it’s all about choosing the battles you can win and building up your confidence through independent means. Utilize your exceptional concentration to focus on what you want, and then prioritize the best way to achieve it. While it’s not usually the way of Aries, it will work splendidly.