The Saturn In Virgo: Significance and Meaning

The Saturn in Virgo people like to have everything in order and are extremely meticulous about details.

The Saturn In Virgo: Personality

As meticulous as Virgo is with details, Saturn in Virgo is downright fastidious with their focus on the minute facts and figures. While this is usually helpful, it can sometimes be a hindrance when it causes them to lose sight of the bigger picture. For them, it’s all or nothing.

Saturn in Virgo defines the title “perfectionist” as they go out of their way to ensure every facet of a project or plan is carried out to the letter. Saturn in astrology represents a father figure, someone who places limitations on the decisions we make and the way we lead our lives. Virgo is already one of the more reserved sun signs, so Saturn in Virgo is the most introverted of them all. 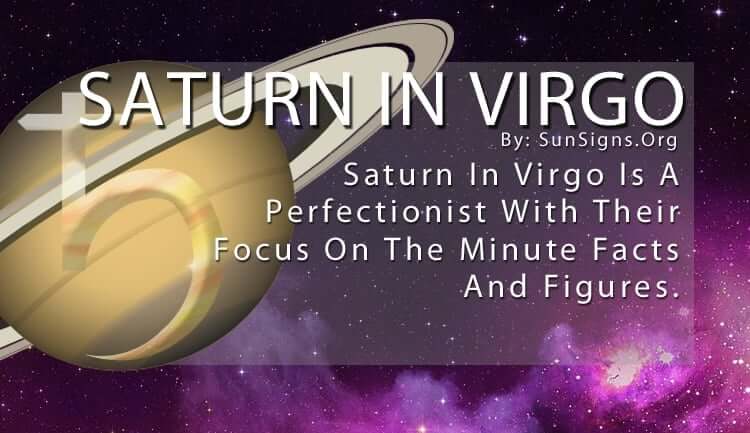 Positive Traits of the Saturn in Virgo

The one place their meticulous nature serves them well is in their career. Management knows Saturn in Virgo are hard workers who will not only get the job done but get it done right the first time.

It may take them more time to complete the task than other people. So they would do best to give Saturn in Virgo long-term projects with a lot of small elements. They pride themselves on being able to handle some difficult tasks at the same time and thrive on having a busy schedule. And they are fully capable of handling it too, as long as they realize their limitations.

When that happens, they have to learn to prioritize things in such a way that they can get them done promptly without stressing out completely. This may require delegating authority to other people. And that is the most difficult idea for them to fathom.

The best thing the Virgo Saturn people can do for themselves is to find an outlet for rest. They are too focused on maintaining the perfect lifestyle, so much so that they miss living it. While taking care of responsibilities is important, there’s more to life than just that.

Negative Traits of the Saturn in Virgo

The Saturn in Virgo can lead a somewhat lonely existence as they don’t like to go out and meet new people or take risks of any kind. Their family and a small circle of friends would do well to encourage them to come out of their shell more, although that’s not an easy task. Saturn in Virgo is so rigid in their schedule it’s nearly impossible to get them to break any of their habits. Routine is critical to them.

Sometimes they take on too much, and this begins to weigh on them physically and mentally. But Saturn in Virgo is so obsessive-compulsive they have difficulty letting go and allowing someone else to handle their affairs. They want to be in control of everything at all times. But sometimes that can be overwhelming.

The Saturn In Virgo have to learn to schedule some “me time” that doesn’t involve any work or errands. Leisure activity is just as imperative to maintain as all their other activities. If they are to have a fulfilling existence Saturn in Virgo has to learn to laugh at their mistakes and move on, rather than try to avoid them altogether.

For the sake of their health and their relationships, they should learn not to take their devotion to perfection. But they should try spending time with the people closest to them. They will never regret that choice.