The Saturn In Leo: Significance and Meaning

The Saturn in Leo people are good leaders who have the right level of control and discipline to get the work done.

The Saturn In Leo: Personality

Leos are known for their larger-than-life personas. But Saturn in Leo keeps their true personality close to the vest. They are more reserved and disciplined in their endeavors. But deep down they sometimes want to break free of those responsibilities. Those who know them best encourage them to let loose.

Saturn, known as the planet of Karma. This makes things difficult and places limitations on our activity so that we come to terms with reality. So for a bold, charismatic sign like Leo, Saturn tones down their risk-taking tendencies to a bare minimum.

Saturn in Leo is not very confident in themselves and they tread carefully when starting a new endeavor. They aren’t afraid to do what’s necessary to complete the project. But they don’t throw caution to the wind either. But if it’s one thing Saturn in Leo does well, it’s making sure their business gets done. They possess the ability to go off on a spontaneous adventure. They just need someone to push them in the right direction. 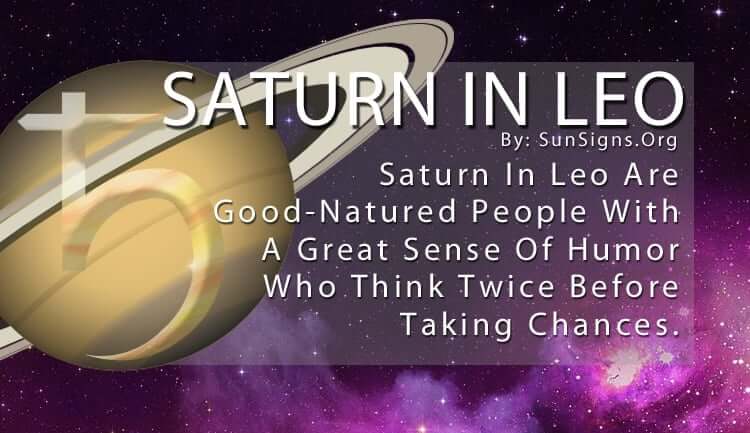 Positive Traits of the Saturn in Leo

And if Saturn in Leo can find leisure activities every week to keep their stress levels down that’s an even bigger plus. As a fire sign, they do have a limited amount of passion inside them. They simply don’t want to let it out too frequently.

The Leo Saturn people need to maintain some semblance of control at all times. So they only occasionally let themselves go and have a good time. They are good-natured people with a great sense of humor. So hanging out with them on one of their “special occasions” is a lot of fun.

Negative Traits of the Saturn in Leo

The Saturn in Leo naturally takes charge of the situation. This sometimes comes across to others as bossy. On top of that, they are a stickler for following the rules. And that makes them seem even less fun. Their rigid way of doing things is a turn-off to some who feel their inability to go with the flow is boring or even detrimental to their success.

One major thing they have to watch out for, though, is holding in their true thoughts and feelings. This can cause a variety of physical and mental conditions that can compromise their health. Anxiety or severe depression can set in if they don’t go out and have fun once in a while. Finding a way to let off some steam and enjoy life to the fullest is the best way to curb unhealthy effects for this Saturn sign.

The only time Saturn in Leo will drop their guard is when they are in love. Otherwise, they have too much pride and dignity to be seen as acting silly or foolish. This can be a deterrent in their romantic life, as they aren’t as willing to let themselves fall in love as other zodiac signs.

Their ego can get in the way of finding someone who can help them open up and be more honest with the world about who they are. But if they let down their defenses from time to time and allow others in, they will find a much more fulfilling existence awaits them.

The Leo Saturn people have to spread their arms wide and embrace it. It is against the nature of Saturn in Leo to take chances. But if they learn to seize the right moments, they will go much further in life. They have to dig deep to uncover their courage.