Saturn in the Twelfth House of the Natal Chart

What does Saturn in 12th House mean? These people are kind and loving. But sometimes, people will take advantage of their flexible nature.

Those with Saturn in the twelfth House will have difficulty with constant self-doubt. You have a deep-seated problem with confidence, either stemming from your childhood or a more recent failure, and you can’t let it go. The only thing that makes you feel better is helping others.

Saturn symbolizes an authority figure in astrology and stands for concentration, commitment, persistence, strictness, discipline, and responsibility. It’s this influence that brings the most guilt and anxiety.

You often feel like a child who has difficulty pleasing anyone. This is what makes you such a sensitive and sympathetic individual. You want to feel useful. So, you utilize your listening skills and intuition to make people feel better. 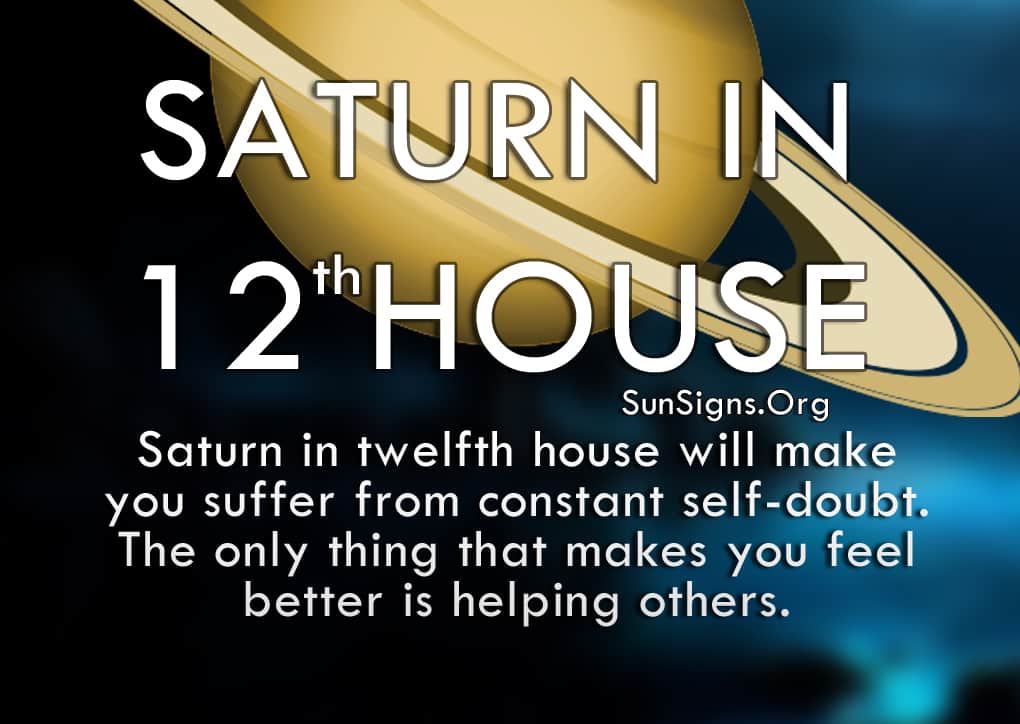 The Saturn in 12th house personality are so generous and open-minded that you attract people from all walks of life into your social network. The only thing you have to be careful of are false confidantes.

Because you are so accepting of others, you also attract scam artists and people who want to take advantage of your good nature. This is where Saturn will reprimand you if you allow yourself to become someone’s doormat. Keep an eye out for these people so you don’t fall for everything.

While Saturn can help you find purpose and direction through that noble pursuit, you still have an unhealthy fear of letting people down. Because of this, you have trouble moving forward in your life, either in your career or your relationships or sometimes both. Take the time to stop and analyze what’s affecting you and your actions. It’s okay to admit you can’t do something on your own, but you need to act on it.

People with Saturn in the twelfth House in their horoscope don’t want anyone to think they need help. So you internalize your feelings to the point they begin to eat at you from the inside. It’s this kind of personal tug of war that makes you insecure. And, Saturn doesn’t help to put you back on the right track. And it’s more so difficult as Pisces is your ruling zodiac sign.

Instead, you feel immense regret over things that are often out of your control. Don’t allow this remorse to keep you from going after what you want. You deserve happiness too. And, you don’t have to become a martyr to make it happen. Talk to your closest friends and family, for you have many to choose from.

In astrology, Saturn is the most difficult planet to deal with; having that it shows the places that you need to work on in order to become better. It points you to the areas of your life where you need to work hard to overcome challenges.

So many people find it hard to master the workings of Saturn, but once they do, they receive great rewards and great transformation in their lives. Saturn in 12th House luck is worth it having that positive energies will keep flowing in your life.

Saturn in the 12th House Meaning

People in Saturn in the 12th House are sensitive. They enjoy being on their own and exercising personal freedom and power over their lives. They have people who are always out to dictate their lives. You love being your own self and living by your values and principles.

This placement reveals that you need quality time to yourself so that you can reconnect with the person you are. Never settle for less because then things will never work out for the better in your life. Saturn in the 12th House man or woman has a problem sharing their feelings and emotions with people.

Saturn being present in the 12th House urges you to work on your problems and allow positive things to manifest in your life. Focus on overcoming the challenges in your life. Always find light at the end of the tunnel.

Saturn in the Twelfth House and Fears of the Unknown

What is the importance of Saturn in the 12th House? With this placement, you are capable of letting go of the past. Do not focus much on the things that cause you pain and fear. Always move forward.

When you need help, ask for it. People won’t think you’re weak or an invalid, and some may be flattered that they can return the favor of care that you bestowed upon them. Don’t hide from your problems. Face them head-on, and you’ll start to gain some confidence in your decisions.

People with Saturn in the 12th House have to learn to accept themselves and their actions, both the good and the bad. Put yourself out there more and learn from your experiences. While your first instinct is to shy away from reality, allow Saturn to boost your ego and research problems and daily issues.

You can take yourself where you want to go, so use your dreamy nature to figure out where that is. Your active imagination can put you on the right path as long as you don’t escape from reality for too long. Being present with the rest of your loved ones will give you the boost you need to go after your dreams.