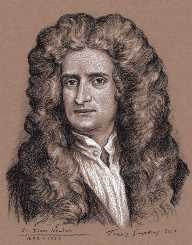 Mathematician, physicist, and astronomer Isaac Newton was born in Woolsthorpe-by-Colsterworth a small village in Lincolnshire on January 4, 1643.

His father was a farmer, Isaac Newton Sr., who died before his son was born. Although financially well-off, Newton Snr. was illiterate. When Newton was three years old, his mother Hannah Ayscough remarried.

From that time onwards, Newton lived with his maternal grandmother, Margery Ayscough.

Isaac Newton was a pupil at The King’s School Grantham. School work included the classics, but he did not study mathematics or science at high school level. When he was 17, his mother removed him from school so he could farm. Newton disliked agriculture and was allowed to return to school. In 1661 he entered Cambridge University as a law student. He worked as a servant for wealthier students to help fund his education.

In his third year at Cambridge, Newton began studying mathematics and physics (called natural philosophy in those days). He also had an interest in alchemy. Newton was taught Aristotelian natural view despite the fact that Galileo Galilei had published Two New Sciences claiming a new scientific basis for the physics of motion twenty-five years previously. Galileo's work led Newton to forego what he was being taught at Cambridge and study the experimental works Galileo, Kepler, Boyle, and Descartes. As Newton became more familiar with their work, he began to believe that he could make discoveries. He focused his attention on gravity, light, color, vision, and atoms. At the end of his third year at Cambridge, Newton obtained a four-year scholarship. In 1665, he received his B.A. degree.

Isaac Newton was 22 in 1655 when he made his first discovery. He discovered the generalized binomial theorem in mathematics.

When the Great Plague forced Cambridge to close in 1655, Newton returned home to Woolsthorpe-by-Colsterworth and continued his research. He returned to Cambridge in 1667.

When Newton was 24, he was elected as a Fellow of Trinity College and the following year, 1668; he obtained his M.A. degree. In 1669 he was appointed the Lucasian Professor of Mathematics. Newton won this appointment on the recommendation of Isaac Barrow who was vacating the position. Barrow’s proposal included the fact that he believed Newton had an extraordinary genius.

Newton retained the position as Lucasian Professor of Mathematics at Cambridge University until 1969.

Newton’s discoveries include the generalized the binomial theorem. He showed that sunlight is made up of all the colors of the rainbow. Built the world’s first reflecting telescope. Discovered calculus. Wrote the Principia which explained gravity and motion and which is considered one of the most important scientific books ever published. He found the law of universal gravitation. Newton’s Laws which formulated his three laws of motion. Newton explained how tides are caused by gravity between the earth moon and sun and proved that the earth is not perfectly spherical. The concept of a Newtonian fluid and Newton’s Method are both named after his discoveries.