The Saturn In Scorpio: Significance and Meaning

The Saturn in Scorpio people feel very strongly about everything they take up in life.

The Saturn In Scorpio: Personality

In astrology, Scorpio is known for being deep and mysterious. Saturn in Scorpio is one of the most powerful of the zodiac signs. Their passion rules their life, but they hold it down below the surface so no one else can see it. This allows them to be cunning and ruthless.

Saturn acts like a father figure, placing limitations on our decisions and making us realize the consequences of our actions. This makes Saturn in Scorpio even more secretive than usual. They keep everything close to the vest, to begin with. While they can read others like a book they reveal very little about themselves, if anything. 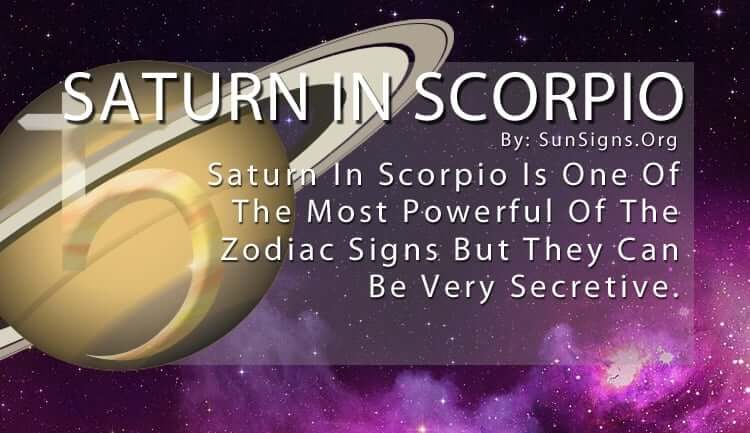 Positive Traits of the Saturn in Scorpio

The only way for Saturn in Scorpio to rectify these secretive tendencies is to allow others to see more of their personality and share their ideas and aspirations. That’s the best way to get people on your side.

Getting things off their chest helps the Scorpio Saturn person immensely. And with that relief comes more self-confidence and a calm mind. They are used to plotting and scheming ways to get ahead. But, they need to learn that there are other ways to obtain what they want.

Because they are such hard workers, they need to focus their attention toward positive reinforcement and supportive measures. Letting their guard down doesn’t make them weak. On the contrary, it can be the one thing they need to do to get others on-board with their creative endeavors.

Negative Traits of the Saturn in Scorpio

The Saturn in Scorpio believes being secretive is the best way to not only get ahead in their career but life in general. If people don’t know that much about them, then they can’t use anything personal against them. This is extremely important to them because they get hurt very easily and it’s next to impossible for them to forgive such an offense. On the other side, they will do whatever it takes to win. This sometimes means completing shady deals to get what they want. They can manipulate any situation to their advantage.

But this is only because Saturn in Scorpio always have doubts about whether or not they can pull something off by the time they need it done. This kind of insecurity leaves them feeling inadequate and afraid to take bigger risks.

As a water sign in astrology, they are quite Scorpio are emotional, but they don’t show it to others. This means they don’t deal with their emotions, leaving themselves vulnerable to anxiety or depression. They can’t help but go into everything and feel everything as deeply as possible. And, sometimes they can’t handle that much intensity all at once.

Having a healthy dose of self-control is good. But, anything above your limits and you start to break down inside. This makes Saturn in Scorpio withdraw even more from others when they should be opening up to their closest friends and family. This also makes it difficult for them to maintain a healthy romantic relationship, as they don’t want to divulge anything about themselves. Add to that their possessive nature and they turn jealous very quickly.

They have to learn to overcome their fear and control their passion in a way that keeps them healthy and happy. And be sure to schedule in some downtime with your social circle. Rest are always recommended for Saturn in Scorpio. All they have to do is grab it.