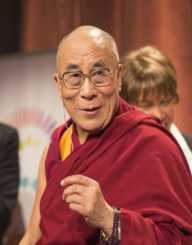 The Dalai Lama is the merger word Dalai (ocean) originated in Mongolia and bla-ma a Tibetan word which means guru or mentor. The Dalai Lama in simple terms is a monk of the Gelug school of Tibetan Buddhism. He is an important figure in the Geiuk tradition which serves as a symbol of unification. The Dalai Lama’s are successors of the line of tulkus and believed to the incarnation of Avalokitesvara. They serve as rulers of the Tibetan plateau and were autonomous with complete sovereignty. The current Dalai Lama is also the 14th Tenzin Gyatso.

Being selected as the tulku of the 13 Dalai Lama, 1937, he gained recognition from the people at a public declaration in 1939. He then came to Lhasa in 1940 and assumed office and temporal duties in 1950 at age 50 during the invasion of Tibet by the People’s Republic of China. In 1959, he fled to India as a result of an uprising in Tibet and had remained there to date. His political influence, however, won him a Nobel Peace Prize in 1989. According to a poll by Harris Interactive, New York, in 2013, he was the most popular world leader at the time.

History of the Dalai Lama

The Dalai Lama is believed by the Central Asian Buddhist countries as an incarnation of the Avalokitesvara, the Bodhisattva of compassion. The figure is supposed to have a cordial relationship with the people of Tibet and sets typically in to rule through incarnations as a benevolent ruler of the people. This is captured in The Book of Kadam, which states the identity of the Tibetans as the incarnation of Avalokitesvara.

The 14th Dalai Lama Tenzin Gyatso was born was born on July 6, 1935, in Takser, Amdo, Tibet. Born Lhamo Dondrub or (Thondup), to mother Diki Tsering on a straw mat he, has seven other siblings. According to family, his first language was in his own words. Upon the death of the 13th Dalai Lama, a search team was sent to look for a new Dalai Lama. Squads were dispatched to the north-east, east and south-east for the search. However, more priority was given to the north-east because the embalmed body of the demised Dalai Lama was facing south-east has turned to north-east.

Upon several visions, the team set to the village of Amdo where they first met with the Panchen Lama who was then investigating the birth of unusual children at the area. There, three names were then given to the search team headed by Kewtsang Rinpoche.  Another group which was led by Sera Lama visited the village of Tasker where they pretended as pilgrims. They located the turquoise building as seen in the vision and finally identified the new Dalai Lama.

This is when Lhamo Dondrub who was then two years approached Sera Lama and identified him by name as well as spoke a different language alien to his mum with Sera Lama. He was then subjected to another test upon, and it was confirmed that he was the next Dalai Lama. After several diplomatic wrangling, he was finally accepted as the 14th Dalai Lama in 1939 with the name Jetsun Jamphel Ngawang Lobsang Yeshe Tenzin Gyatso. However, since he was young then, he was officially enthroned at age 15 in 1950.

In 1950 after the invasion of Tibet, Dalai Lama was made a temporal ruler. It was during his time that the Seventeen-Point Agreement for the Peaceful Liberation of Tibet was accepted. In the agreement, it was resolved that Tibet would formerly be part of the People’s Republic of China. Dalai Lama worked with the Chinese government and even attended the first session of the National People’s Congress as a delegate in 1954. There, the Chinese constitution was discussed, and he was selected as a Vice Chairman of the Party’s standing committee. In 1956, there was an uprise Kham which brought about a war in the area.

The rebels who were supported by the CIA through the establishment of a training camp for the Khampa guerrillas were set against the Communist Chinese. For fear of his life, Dalai Lama with the help of the CIA went into exile in India in 1960. In exile, he was able to bring together other Tibetans and set up The Government of Tibet in Exile, in Dharamsala, India. To have better education for the people, he set out an educational system to teach them literacy and religion. For a total liberated Tibet from China, Dalai Lama appealed to the United Nations to push for that agenda. Through a resolution by the General Assembly in 1959, 1961 and 1965, the UN called on China to respect the rights of Tibetans.

The Dalai Lama’s primary aim is to make Tibet a democratic and self-governing Tibet partnering with the People Republic of China. He proposed in 1987 during a speech at the Congressional Human Right Caucus in Washington DC, 1987. Dubbed the Strasbourg Proposal, The Dalai Lama also asserted that Hans Chinese be barred from entering Tibet. However, the said proposal was rejected by the Tibetan government.  His return to China has been entangled with many preconditions which Dalai Lama is against. To him, he must return to his homeland without any restriction and preconditions.

Dalai Lama's bad relationship with the government of the People’s Republic of China has brought about several fracas and accusations. He was accused of inciting the Tibetan violence which erupted in China in 2008. However, addressing from Japan, he denied being the brain behind the violence and that he has even lost faith in the negotiation process. He nonetheless added that the Tibetans could decide on what to do. He say’s when he is 90 he would consult the elders of Tibet and other relevant bodies there to deliberate on whether there should be a next Dalai Lama when he dies or it should be deleted.

The Dalai Lama was prevented from entering Russia in 2005 after an invitation by the traditional Buddhist republic of Kalmykia. Also during a visit to the Republic of China (Taiwan), the Taiwanese aborigines staged a protest against him citing that his visit was politically motivated.

The Dalai Lama has been a strong advocate for animal right, against abortion, the rights of women, for the protection of the environment and living a healthy life.

the Dalai Lama has had several recognitions and awards for his leadership, activism and spiritual career.

He received the Ramon Magsaysay Award for Community leadership in 1959. In 1988 he received the Dr. Leopard Lucas Prize, Nobel Peace Award in 1989, Christian Humphrey Award in 2005 and Congressional Gold Medal in 2007.