King of Pentacles Meaning In A Tarot Reading

The King of Pentacles tarot card represents the point in the Minor Arcana where we come into a point of security, power, and control.

We have disciplined ourselves to accomplish our task, and aren’t allowing other things to stand in our way. We have by this point achieved most of our tasks, but are well suited to maintaining them. 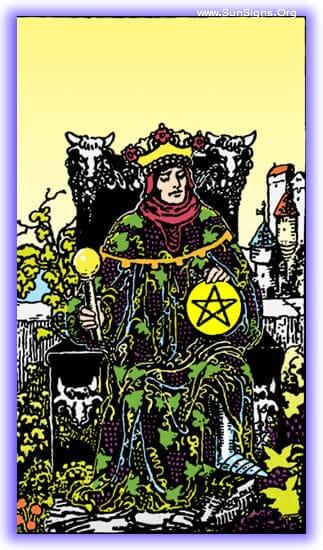 The King of Pentacles upright represents a person living in a time of plenty, stability, power, and discipline. He is a paternal figure who can provide must life wisdom simply from the knowledge of what he’s lived through, as well as his ability to have learned from it.

His appearance in the tarot reading can indicate the completion of a task or the culmination of an investment. The maintenance of everyday tasks falls into his purview as well.

The King of Pentacles in your past indicates that you’ve been living in a time of stability and comfort. All things have been in their place, and there’s been little in the way of unwelcome surprises or strain.

The King of Pentacles in the present position calls on you to pay attention to the meticulous details of day to day life. The stability you’ve been experiencing is going to require continued effort, and right now is definitely a time to maintain your discipline and security.

The future is heralding the completion of a financial journey. A business venture is going to come to fruition, or an investment will come solid. Whatever the case, a project you’ve invested a fair amount of time and effort in is about to pay off. 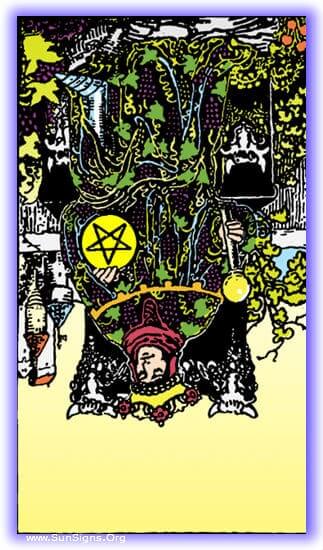 The King of Pentacles inverted represents an over-abundance in your life of the good things. The King out of balance can have an obsessive tie to his vices, money, food, sex, potentially even drugs.

His discipline has turned to stubbornness, his power to possessiveness. Due to his love of routine he can find himself having dug a rut that he’s now stuck in. His appearance can also indicate a fear of commitment.

The King of Pentacles in your past indicates you’ve been exerting a bit too much authority over those around you. You’ve been domineering and controlling, rather than a loving and secure father figure.

Your vices may be having their way with your highness. It’s time to take a step back from your loves, as they have turned from mere pleasures to monkeys on your back.

Whether that’s a glass of wine at night turning to a bottle, or a fine meal turning to a nightly glut, it’s time to step back and stop letting your passions rule you.

The tarot card appearing in this position is an indicator that tables are about to turn. The one you most rely on to be your rock, your support, is going to instead start needing you to be the source of stability in their life.

This could represent a possible traumatic event or loss of a job, but their self-confidence and position as provider is about to be severely undermined.