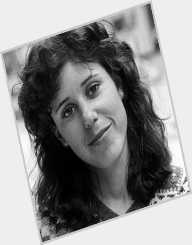 American actress and comedian Julie Kavner was born on the 7 September 1950 in Los Angeles, California.

When The Simpsons show debuted in 1990, Julie Kavner was part of the original cast, voicing Marge Simpson. She also sounds Marge’s twin sisters, Patty and Selma as well other female members of Marge Simpson’s family.

Julie Kavner received a 1978 Primetime Emmy Award: Outstanding Continuing Performance by a Supporting Actress in a Comedy Series for her performance as Brenda in the sitcom Rhonda. And in 1992 she won an Emmy for Outstanding Voice-Over Performance for Marge Simpson.

Julie Kavner has been in a relationship with American television producer and writer David Davis since 1976.