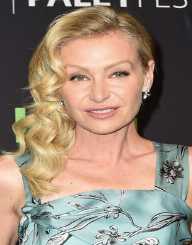 Portia de Rossi is an Australian born American actress famous for her role as Nelle Porter in Ally McBeal. She is also an animal lover and activist, and a philanthropist.

Portia de Rossi was born Amanda Lee Rodgers on January 31, 1973, in the Horsham City, Western Victoria in Australia. She legally adopted the name Portia De Rossi at the age of 15. She moved with her parents Barry and Margaret Rodgers to Geelong City, Australia. She grew up with her mother after her father died in 1981. She was just nine years old.

She went to Melbourne Grammar School. After graduating, she enrolled at the University of Melbourne to study law. De Rossi left her legal studies for an acting career without graduating.

De Rossi started her acting career at the age of eleven. She auditioned and got roles in television commercials as a model. She continued doubling her studies and her acting roles throughout her school years. In 1994 she went to audition for the film Sirens. De Rossi got accepted and terminated her studies for acting.

After the film Sirens, she majored her efforts in the television series. De Rossi moved to Los Angeles to pursue a major career in Hollywood. She appeared in minor roles in films like the 1994 production Nick Freno: Licensed Teacher, and Too Something. Some other films she also starred in are Astoria, Breed Apart, and Twilight Zone.

In 1997 she got a breakthrough in her career. De Rossi got a major role in the film production Scream 2. In 1998 she landed a role in the legal drama Ally McBeal. Having dropped her Australian accent, De Rossi received much acclaim from her American audience. She remained in the casting crew until the show ended in 2002. Later in the year, she appeared in Girl. In 1999 she got an acting role in Stigmata, and another film The Invisibles.

In 2003 she auditioned for a lead role in the television series Arrested Development. She got picked and appeared in the show as Lindsay Funke, a rich materialistic girl. She also featured as the wife of President John Kennedy in the film America’s Prince: The John F. Kennedy Jr. Story. In 2014 she joined the acting crew of the political television series Scandal.

De Rossi continued with modeling career alongside her acting part. She has appeared on several American magazines as the cover model. She has given interviews and played guest host to various talk shows. In her acting career, De Rossi has appeared in over 36 television and film productions.

De Rossi married Mel Metcalfe in 1996. The couple divorced three years later in 1999. In 2005 she admitted to being a lesbian. She married her partner television show host Ellen DeGeneres in 2008. She then adopted her partner’s surname and became Portia DeGeneres. She dropped the surname when the couple separated.

She is a member of several charities and animal rights organizations. She often donates to charitable causes to organizations like Best Friends’ Animal society, The Human Society, Farm Sanctuary, and The Gentle Barn. De Rossi is a partner to the FXB International. She helps in fundraising to support the fight of HIV/AIDS in Africa. She also supports the terminally ill children in the world through The Art of Elysium organization.

De Rossi got vilified after her divorce to her first husband Mel Metcalfe. She admitted to marrying him so that she could get a green card allowing her permanent residence in the US.

In her career, De Rossi broke several barriers. She started acting at the age of eleven. She changed her name at 15 years. She terminated her legal studies for her acting career to support her mother in finances.

She overcame her eating disorder and is now an activist for healthy eating for a better life. Despite not having children, she supports terminally ill children all over the globe.