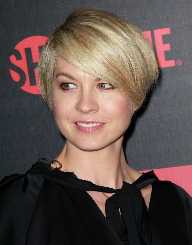 Golden Globe Award-winning American television and film actress Jenna Elfman was born as Jennifer Mary Butala on September 30, 1971, in Northridge, a neighborhood of Los Angeles, California, United States of America. She was the youngest of the three children of her parents, father Richard Butala, an aircraft executive in the Hughes Aircraft Company and mother Susan Butala, a homemaker. She was trained in classical ballet dancing since the age of five. Elfman earned her graduation as a dance major from the Los Angeles County High School for the Arts and attended the California State University, Northridge (CSUN) for a brief period.

She had to abandon ballet dancing after a persistent ankle injury hindered her frequent movement so necessary for ballet dancing. She grew up as a Roman Catholic in her religious belief and hailed from a Croatian heritage from her father’s side. Her paternal uncle Tony Butala, younger brother of her father, was the lead singer of the American male pop vocal trio titled ‘The Lettermen’.

Jenna’s first engagement in front of the footlights was a performance at the inauguration of the presentation ceremony of the 1991 Academy Awards Show. She soon launched her professional career performing as a dancer in a number of rock music videos including the likes of videos of artists such as Chris Isaak and Depeche Mode. Her five feet ten inches tall frame and her striking features as a Californian blonde facilitated her association with the rock band ZZ Top, with whom she toured under the pseudonym of ‘Legs Girl’.

She also honed her acting skills by taking lessons from the renowned acting teacher Milton Katselas at the Beverly Hills Playhouse. She was soon seen appearing in a number of television commercials as a precursor to her acting career. Her acting career graph saw a slow but steady upward trend after having appeared on some of the most popular television sitcoms such as ‘The Single Guy’ and ‘Roseanne’. She also appeared in popular dramas like ‘Murder’ and ‘N.Y.P.D. Blue’. She achieved a significant breakthrough in her nascent acting career when she was cast in the 1996 ABC sitcom ‘Townies’. Though the short-lived television series (aired between September and December 1996) failed to cut much ice among the dedicated American television viewers, Elfman’s portrayal of a lecherous waitress was admired and acclaimed profusely.

The most important development of her acting career happened when she landed the role of Dharma, wife of Greg in the ABC television series ‘Dharma and Greg’ aired between September 24, 1997, and April 30, 2002. Her passionate and bohemian style of characterization of Dharma was very well complimented by the depiction of the conservative character of Greg, superbly portrayed by Elfman’s co-star Thomas Gibson. Both shared a unique bonding and an extraordinary on-screen chemistry between them. The critics and the audiences very well liked their characters and the perceived novel and fresh way of projecting the kind of contemporary romance.

After garnering huge popularity and success during the five-year-long broadcast of the ‘Dharma and Greg’ show which includes winning a Golden Globe Award for Best Actress in a comedy series in 1999, she made her debut in films as well. Her maiden appearance in the dark comedy ‘Grosse Pointe Blank’ in 1997 marks her crossing over to the mainstream film fraternity. She subsequently starred in the wildly hilarious comedy film ‘Krippendorf's Tribe’. She went on to appear in many more films in diverse roles showcasing her unique acting talent and proving her versatility as an actor. She even provided the voice of an owl in the 1998 comedy ‘Doctor Dolittle’.

She was invited to jointly host the Emmy Award presentation ceremony along with David Hyde Pierce in 1999.

Jenna Elfman met her future husband actor Bodhi Elfman in February 1991 while auditioning for a soft drink called Sprite manufactured and marketed by the Coca-Cola Company. They tied the nuptial knot on February 18, 1995. They together have two children, both sons. Elder son Story Elias was born in Los Angeles, California on July 23, 2007. Easton Quinn Monroe, their second son came into being on March 2, 2010.