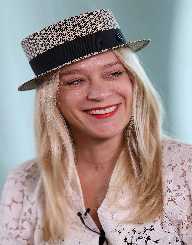 American actress and fashion designer Chloe Sevigny was born on the 18 November 1974 in Springfield, Massachusetts. She was brought up in Darien, Connecticut.

When Chloe Sevigny graduated from high school, Sevigny relocated to New York City. She initially worked as an intern at Sassy magazine. Around this time Chloe Sevigny also began modeling as well as appearing in music videos. In 1995 she made her first film appearance in Kids.

Chloe Sevigny made her debut as a film director in 2016 with the film Kitty.

In 2010 Sevigny won a Golden Globe for Best Actress for her role in Big Love (2006). Chloe Sevigny has won numerous other nominations and awards for her work.

Chloe Sevigny is unmarried, in the past she dated director Harmony Korine and musician Jarvis Cocker.