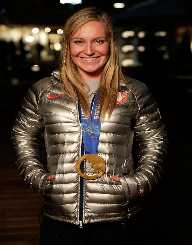 Jamie Anderson was the fifth among the eight children of her parents. Growing up in the mountainous town of South Lake Tahoe, Anderson easily got accustomed to the lifestyle prevailing in that part of the world.

She fell in love with the outdoor activities and sports so common in the way of living there and along with her five sisters was homeschooled at Visions In Education. She joined two of her eldest sisters as part of the snowboard team at the local Sierra-at-Tahoe resort after being introduced to the game at the age of 9 by them.

From that time onwards, Anderson began participating in regional snowboard competitions and gradually started competing in the national and junior world championship events. At the age of 13, Anderson was selected for competing in a racing event called boardercross in her first Winter X Games.

After having shown her skill in boardercross, Anderson quickly switched over to another form of mountain sports called slopestyle snowboarding. She soon picked up the necessary tricks of the game and started enthralling the spectators of the game by showcasing her excellent skill.

After these initial successes, Jamie Anderson began participating in the professional circuit and became the women’s TTR World Tour Champion, a premier professional event, in 2008, 2011, 2012 and 2014.

Anderson also won the Winter Dew Tour women's championship in 2011 and 2012. In 2013 Winter X Games, she again won a Gold Medal in the slopestyle event taking her Gold Medal tally to four and overall medal tally to seven.

Slopestyle event five for the first time in the 2014 Winter Olympics held in Sochi, Russia. Anderson made it count by winning the Gold Medal in her signature event after notching up an impressive score of 95.25. Four years later, she once again emulated her feat by winning her second consecutive slopestyle gold in the 2018 Winter Olympics held in Pyeongchang County, South Korea.

In April 2018, she participated in the reality show; ‘Dancing with the Stars: Athletes episode’ along with fellow U.S. Olympian skater Mirai Nagasu and Adam Rippon among others. She also participated in the seventh season of ‘Celebrity Apprentice’ show in 2015 and was eliminated in the fourth episode.

Extending a helping hand to those who were unable to pursue the sport of snowboarding due to the paucity of funds in spite of their abundant talent in the sports, Anderson collaborated with her old middle school and put up a sponsorship program in place for those competent children.

Anderson, She founded an environment-friendly clothing company and named it TRYE (To Respect Your Earth). Apart from paddleboarding, hiking and camping, she mentioned Yoga as one among her preferred choice of sports and activities other than snowboarding.