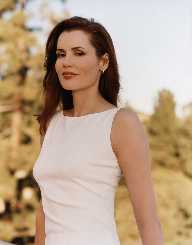 Geena Davis was born Virginia Elizabeth on 21st January 1956. She is an actress, a renowned film producer, a writer, a former fashion model, and an old archery player.

Davis was born in Wareham, Massachusetts to her mother who is a teacher assistant, and father, William F. Davis a civil engineer by profession and church deacon in their local church. She has one sibling called Danforth. She got an interest in music at an early age where she took up learning to play the piano and the flute.

As a kid, she proceeded to play the organ and eventually served as an organist at her local church. While attending High school, Geena Davis became part of the exchange program in Sweden. She later graduated a bachelor’s degree in drama from Boston University in the year 1979.

While working as a model, Geena Davis was noticed by a casting director and landed her first acting job in 1982. Between the years 1983 to 2016, Geena has over 15 movies under her career. She recently had a role in the well-known ‘The Commander in Chief’ series as the first Woman president of the US and as a doctor in the widely known Grey’s Anatomy.

Geena Davis was married to Richerd Emmolo between 1982 and 1983. She later got married to Jeff Goldblum between the year 1987 and 1990 when they had starred in three successful films.  Her third marriage was to movie director Renny Harlin where they worked on her two movies.

Her recent marriage was to Reza Jarrahy, an Iranian American plastic surgeon on September 1, 2001. They have three children: a girl and a set of fraternal twin boys.

Geena Davis was introduced to archery in 1997, but her experience in the game stood out, in July 1999 she was among 300 women who vied for a spot in the U.S Olympics archery team in Sydney 2000. Though she did not cut the national team, she came 24th but ended up participating in a wild-card entry in the Sydney International Arrow competition.

Geena Davis has bagged some awards in her career. In the year 1988, she won the Academy Award for Best Supporting Actress for her role in The Accidental Tourist. For her part in the drama series Commander in Chief, she took home the Golden Globe Awards for Best Actress. Geena was nominated for Emmy Award and a nomination for the Outstanding Female Actor in the same series. In 2006 she was feted with the Women in Film Award.

Together with her co-star in the movie Thelma and Louise she was nominated for an Academy of Best Actress. After getting a replacing role in the film A League Of Their Own in the year 1992, she went ahead to receive a Best Actress Golden Award Nomination for her startling performance. Davis was nominated for the Saturn Awards for her roles in The Long Kiss Goodnight and Stuart Little.

Geena Davis has taken up several humanitarian projects, she is known for her role in supporting equality in sports opportunities while avoiding discrimination in American institutions. Davis sponsored one of the most significant research projects on gender distribution in the entertainment industry.

In the year 2011, together with other celebrities, she carried a campaign with an initiative tied to East Africa drought crisis. They partnered with organizations like USAID to show the world the real facts of the situation on the ground. In 2015, Geena Davis started promoting the annual film festival in Arkansas that highlighted the diversity in filming.