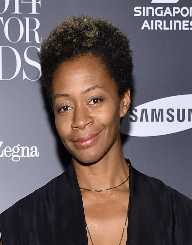 Kara Walker is an American of African heritage who rose to fame in the 90s after impressing with her extraordinary performance in a new talent show in New York. Her acts try to explore race, sexuality, and violence.

Kara Elizabeth Walker was born on 26th November 1969 in Stockton, California. She grew up with her father who was a painter and a professor. Her mother worked as an administrative assistant. As a child Walker watched his father make drawings, and she developed the passion of drawing through that. She wanted to be like her father.

Her father later found a job at Georgia State University. The family was forced to move to Stone Mountain where she spent the rest of her childhood.

After graduating from high school, Kara Walker enrolled in Atlanta College in 1991 to pursue Art. She later graduated with a degree in Fine Arts. In 1995, she was awarded a master degree in Fine Arts where she majored in painting and printmaking from Rhode Island School of Design.

Kara Walker work involved demonstrating the history of American racism and slavery becoming one of the leading celebrities in the fight against racism. She drew the public attention in 1994 with her work Mural Gone. She was the recipient of Catherine T. and John D. grant foundation.

During her career, she performed in various institutions including, San Francisco Museum, the Metropolitan Museum of Art in New York and many other places.

Some of her work, however, has had some backlash. She was criticized in 1997 by some African American artists for using African stereotype to her advantage.

For a long period, Kara Walker became a visual arts professor at Columbia University. She later became a Tepper Chair. She is yet to complete her five-year term in the institution.

In 1996, Kara Walker married a German-born professor Klaus Bürgel. The two have one daughter together. Their relationship, however, ended in 2010. She is currently in a relationship with Ari Marcopoulos, a filmmaker and a photographer.