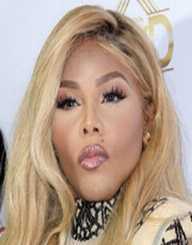 Rapper Lil’ Kim was born Kimberly Denise Jones on the 11 July 1974 Brooklyn, New York to Ruby and Linwood Jones. She has one sibling, a brother Christopher. After her parents split up, Kim was raised by her father, a former U.S. Marine. They had a fractious relationship, with later claims of violence on her part. Jones, therefore, left home at a young age and lived on the streets.

Lil’ Kim was a pupil at Queen of All Saints Elementary School and Sarah J. Hale Vocational School in Brooklyn. She later attended Brooklyn College Academy where she met future rappers, Nas and Foxy Brown. She eventually dropped out of school and was homeless at times.

Lil’ Kim met the rapper Christopher Wallace (b.1972 – d.1997) when he was a 19-year-old small-time drug dealer on the streets of New York. Later he would become a superstar as Notorious B.I.G. Wallace took an interest in Jones when he saw her rapping, and they became friends. In 1992, when he was signed to Bad Boy Entertainment, he also formed a hip-hop group Junior MAFIA of which Jones was a member. Wallace was instrumental in Jones creating the Lil’Kim persona based on her sex appeal.

Lil’ Kim's debut album was Hard Core (1996). Wallace appeared on four of the cuts and was also the executive producer. The album was certified double-platinum and debuted at No.11 on  Billboard 200. The album also established Jones as a celebrity and serious rapper. She recorded Lady Marmalade with others for the Moulin Rouge soundtrack, and the recording stayed at No.1 on the Billboard 100 chart for five weeks.

Wallace was murdered in 1997 and Jones was distraught. The murder has never been solved, and at the time she fell out with his widow, rapper Faith Evans. Lil’ Kim's second album was The Notorious K.I.M. (2000). The album debuted at No.4 on the Billboard 200 and was certified platinum. La Bella Mafia, her third album debuted on the Billboard 200 chart in early 2003 and was certified platinum. The highly acclaimed The Naked Truth (2005) was released when Jones was serving time in jail for perjury.

Lil’ Kim was involved in a shooting incident which took place outside the Hot 97 studio in Manhatten on the 26 February 2001. There had been a scene between Jones’ entourage and that of Foxy Brown, her rival. A man was shot, and when Jones’ testified, she claimed that she did not know that two of her people, Damion Butler and Suif Jackson, had been present at the shooting.

Security footage showed otherwise, and Jones was convicted of perjury and conspiracy for lying to a federal grand jury (March 2005).  She was sentenced to a year and a day in jail and fined $50,000.

In 2016, she put her differences aside with Wallace’s widow, rapper Faith Evans, and they toured together. The two women also collaborated on Lovin’ You for Life, a track on a posthumous Wallace album, The King & I, Evans was producing based on previously unreleased recordings.

Lil’ Kim received a 5-mic review from The Source Magazine for The Naked Truth (2005).

Lil’ Kim has a daughter, Royal Reign who was born on the 9 June 2014. Her father is said to be the rapper Mr. Papers, but Jones has neither confirmed or denied this fact.