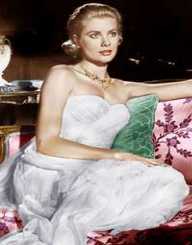 Grace Kelly was an award-winning American actress and philanthropic. Born on November 12, 1929, her marriage to Prince Rainier III in April 1956 made her the Princess of Monaco. Her marriage to Prince Rainer ended her acting career at age 26. Kelly made an acting debut in 1950 as and starred in movies like Fourteen Hours, High Moon, Real Widow and High Society. During the Golden Age of Television in the 1950s, Grace Kelly featured in several live drama production broadcasts and New York City theatrical productions.

She, however, came to fame with her role in Mogambo in 1953. Her splendid performances in that film gained her nominations for the Academy Award and the Golden Globe Award in 1954. The top-class performance in The Country Girl, 1954, won her the Academy Award for Best Actress. Kelly’sacting career span for just six years because of her marriage to Prince Rainer IIIand assuming the role as the Princess of Monaco.

Grace Kelly was born on November 12, 1929, in Philadelphia, Pennsylvania in the United States of America to John B. Kelly Sr. and Margaret Katherine Majer. She had two other siblings Margaret and John Sr.Kelly’s family was very affluent and held high class in the society. John was a three Olympic gold medalist for sculling and was later involved in politics and was appointed the National Director of Physical Fitness by President Roosevelt. Margaret, on the other hand, was a physical Education tutor at the University of Pennsylvania and became the first woman coach of the women’s athletic teams at the University.

Grace Kelly was educated at the Ravenhill Academy. She was introduced into the entertainment and fashion industry at a young as she modeled at local social events alongside her mother and sisters. Her first acting role was in the East Falls Old Academy Players play, Don’t Feed the Animals in 1942 where she played a lead role. Grace Kelly later enrolled at the Stevens School in Northwest Philadelphia, Germantown, and graduated1947. She was also active in acting and dance while there. Her desire to enter into the Bennington College in July 1947 was however shuttered due to her low mathematics score.

After the failed attempt to enter the Bennington College, Grace Kelly then tried to pursue her dream of being an actress. This decision came with strong disapproval by her family especially her father. However, she persisted and auditioned to enter the American Academy of Dramatic Arts in New York. With the influence of her uncle George, she was admitted to the school although the school has met its semester quota. While in school, she modeled to support her studies.

Grace Kelly later made an acting debut was on stage and made a Broadway debut in The Father alongside Raymond Massey and did several other stage performances. During her graduation, she performed in The Philadelphia Story as Tracy Lord. Kelly finally made a film debut in Fourteen Hours in 1951 and subsequently co-starred opposite Gary Cooper in the Hollywood movie High Noon same year. Kelly returned to theatrical acting and featured in several television shows of NBC and CBS.

In September 1952, Grace Kelly successful audition for Metro-Goldwyn-Meyer after the studio had flown her to Los Angeles. She was then offered a contract of $$850 per week for seven years with her own conditions attached. Her first production with the company was in the film Mogambo shot in Nairobi. The film became very successful, and Kelly was praised for her role. Not only that, she received nominations for Golden Globe Award for Best Supporting Actress and Academy Award for Best Supporting Actress.

Grace Kelly then played a role in the TV play The Way of an Eagle and later in the film Dial M for Murder. Her next role was in the film The Bridges at Toko-Ri in 1954 where she played Nancy, the wife of a naval officer Harry. She subsequently played a role in Rear Window as Lisa Fremont. To play that role, she rejected a role in On the Waterfront in 1954, and her replacement Eva Maria Saint won an Academy Award for the role. Her next role was in Paramount’s The Country Girl where she played the role of Georgie Elgin, wife of Bing Crosby. Grace Kelly received several acclamations for the role, and she won the Academy Award for Best Actress.

In 1956, she played the role of an up and coming actress and singer in A Star Is Born in 1956. She had previously played the role of Catherine Knowland, a coffee plantation owner in the film Green Fire in 1954. Kelly’s last film with MGM was in the musical comedy High Society. She had to quit acting after her assumption as the Princess of Monaco. Although she was presented with several roles afterward, she rejected them.

On April 19, 1956, Grace Kelly married Prince Rainier III making her the Princess of Monaco. The two met in the United States of America and proposed after two days. As custom demanded, Grace Kelly and her family had to pay $2 million as a dowry. The grand and colorful wedding was witnessed by 700 guests and watched by over 30 million people on live television. The couple was blessed with three children namely, Caroline Louise Marguerite, Albert Alexandra Louis Pierre and Stephanie Marie Elisabeth.

Grace Kelly died tragically on September 14, 1982, at age 52. She had an accident after suffering a minor stroke while driving from Roc Agel to Monaco on September 13, 1982, in the company of her daughter. She went unconscious and attempted to resuscitate her at the Monaco Hospital proved futile. Stephanie also suffered severe injuries and could not attend her mother’s funeral.

Grace Kelly won several awards for her relatively short acting career including an Academy Award for Best Actress, Golden Globe Award, New York Film Critics Circle Award and National Board Review Award. In 1960, she received a star on the Hollywood Walk of Fame. As a Princess, she received Red Cross Medal, Dame Grand Cross of the Royal Order of Beneficence from the Greek Royal Family, Grand Officer of the Order of the Star of Italy and Dame of the Order of Pope Pius IX among several others.