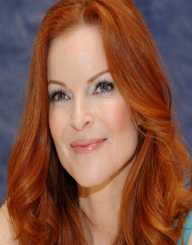 American actress, Marcia Cross was born in Marlborough, Massachusetts on the 25 March 1962 to Janet and Mark Cross. She has two sisters and is of Irish and English heritage.

Marcia Cross was a student at Marlborough High School and graduated in 1980. Cross was interested in acting from a young age and won a place at the Juilliard School in New York City. She obtained a degree in acting in 1984. In 1997 she enrolled at Antioch University in Los Angeles and obtained a master’s degree in psychology (2003).

Marcia Cross was in the soap operas The Edge of Night, Another World, One Life to Live and Knots Landing. She also made guest appearances on Quantum, Cheers and Who’s the Boss.

An early breakthrough role as Dr. Kimberly Shaw in the popular soap opera Melrose Place. Marcia Cross then appeared in Everwood in 2003 and was offered the role of Desperate Housewives in 2004. She received an Emmy Award nomination (2005) for playing the perfectionist housewife Bree Van de Kam and won three Golden Globe nominations three years in a row (2004, 2005 and 2006).

In 2015, she appeared in Quantico playing Senator Claire Hass.

In 1993 Marcia Cross’s partner Richard Jordan died of a brain tumor. Marcia Cross later married Tom Mahoney (2006), and they have twin daughters Eden and Savannah who were born in 2007.