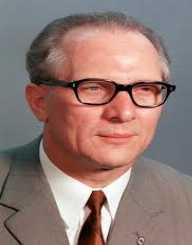 Erich Honecker was born on 25th August 1912, to Wilhelm and Caroline Honecker. He was born in Neunkirchen, Germany, and he had five siblings. Honecker's father was a coal miner, as well as a political activist. He introduced Honecker to communism at a young age. Honecker joined the children's section of the Spartacus League when he was ten. When he was 14, Honecker became a member of the Young Communist League of Germany (KJVD).

In 1930, Erich Honecker joined the Communist Party of Germany, known as the KPD. He finished his studies at the International Lenin School and returned from Moscow in 1931. Honecker then became the leader of the KJVD in the Saar region. The Nazis took power in 1933, and communism went underground in Germany. The Saar region remained outside of the Nazi regime due to a League of Nations agreement.

The Nazis arrested Honecker, but they then released him, and he escaped to the Netherlands. He managed the KJVD activities from there. In 1934, Honecker returned to the Saar. He worked to stop the region from re-joining with Germany. When a referendum was held in 1935, over 90% voted to reunify with Germany. Honecker fled with several thousand others, and he headed for Paris.

In August 1935, Erich Honecker traveled illegally to Berlin. He printed anti-Nazi papers, and in December the Nazis detained him. They held him for two years. After that, the authorities sentenced him to ten years in prison. Honecker served the first part of his sentence in Brandenburg-Gorden Prison. He worked as a handyman while in prison. In 1945, he transferred to Barnimstrabe Women's Prison in Berlin due to his good behavior. He worked on repairing the prison which had been damaged by bombs.

Soviet troops advanced in April of that same year, and although the prisoners were released, Honecker stayed in Berlin.

In May 1945, Hans Mahle took Erich Honecker to the Ulbricht Group. The Group consisted of German communists who were exiled, but they had returned since the end of the Nazi rule. In 1946, Honecker co-founded the Free German Youth (FDJ), also becoming the Chairman. Some months later, the KPD and the Social Democratic Party of Germany (SPD) merged. Honecker quickly became one of the party leaders.

In October 1949, the German Democratic Republic was born. They established a political system very similar to the Soviet Union. A year later, members nominated Honecker as a candidate for the Politburo. Honecker became a full member of the Politburo in 1958, in charge of military and security. He was the main driver in the building of the Berlin Wall.

Over the next 12 years, Erich Honecker's opposition towards Ulbricht grew. Honecker became First Secretary of the Central Committee in May 1971, succeeding Ulbricht. The Soviet had forced Ulbricht to step down. In October 1976, Honecker became Chairman of the State Council. He achieved several significant milestones as the leader of East Germany. A Basic Treaty was agreed upon with West Germany. In 1975, East Germany attended the Conference on Security and Cooperation in Europe. The conference wanted to improve the relationship between the West and Eastern Bloc countries. East Germany also became a full member of the United Nations.

In 1989, Honecker became very ill. During his illness, Hungary opened its border with Austria. East Germans began fleeing through Austria, heading for West Germany. Without Honecker, his colleagues weren't sure how to deal with the problem. Meanwhile, Honecker had his gallbladder removed, as well as part of his colon. A small cancerous lump remained on his right kidney.

East German citizens continued to flee through Czechoslovakia. The Czech government stopped them, but they tried to proceed to the West German embassy in Prague. Erich Honecker forced them to return to East Germany on trains. He then took their citizenship off them before allowing them to go to West Germany.

Unrest continued to grow, and people continued to flee. East Germany closed its borders to West Germany, and to most of the Eastern bloc states, it shared borders with. Other Politburo members deserted Honecker, and in October 1989 he resigned as leader. The Berlin Wall fell three weeks after Honecker stepped down.

In November 1989, a committee began to investigate allegations of corruption in office. As a result, they placed Erich Honecker under house arrest. The charges were embezzlement, high treason, and abuses of confidence. Honecker remained under house arrest for a month. In January 1990 he returned to the hospital to have the tumor treated. Upon his release, he was arrested again.

Due to his poor health, the court canceled his arrest warrant. Honecker and his wife then moved to a residence in Beelitz at the Soviet military hospital. German prosecutors filed further charges, but they were futile as Honecker was living under the protection of the Soviet government. Honecker's final two years were difficult. He couldn't find a country of his choice to allow them residency, and he had further treatment for his cancer. Additional charges were laid, but Honecker won an appeal to the Berlin Constitutional Court. As a result, he didn't have to go to trial.

Erich Honecker died on 29th May 1994 from liver cancer.

In December 1946, Erich Honecker married Charlotte Schanuel, a prison warden where he was serving time. She died in 1947 from a brain tumor. In the late 1940s, Honecker married Edith Baumann, but they divorced in 1953. His third marriage was to Margot Feist in 1953. He was with Feist until his death. Honecker had two daughters.