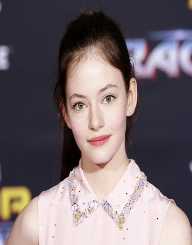 At the young age of four, Mackenzie Christine Foy had already started a modeling career in print ads in 2004. Mackenzie Foy modeled for companies like Polo Ralph Lauren, Guess, and Garnet Hill. Mackenzie Foy later worked with companies like Gap, The Walt Disney Company, and Mattel. After that early career in modeling, Mackenzie Foy went into acting at age nine as a guest-starred in the television showTil Death, 2009FlashForward, 2010 and Hawaii Five-0 in 2010. In 2010, Mackenzie Foy played a role of Renesmee Cullen in a film adaptation of Stephanie Meyer’s book Breaking Dawn, The Twilight Saga: Breaking Dawn – Part I in 2011.

Mackenzie Foy reprised her role in The Twilight Saga: Breaking Dawn – Part 2 in 2012. Her next film was The Conjuring, shot in North Carolina in 2012 and released in 2013. She also featured in the episode "The Return of Lilly D," "Red Eye" of R.L. Stine’s The Haunting Hour playing the role of Natalie. Mackenzie Foy continued her roles in 2012, in the film, Wish You Well, a film adaption of David Baldacci’s book of the same name where she played the lead role of Lou Cardinal. Foy played Daisy in the film Black Eyed Dog in 2014 and continued with her performance with Interstellar playing young Murphy.

Mackenzie Foy has also lent her voice to movies including Ernestine & Celestine for Celestine in 2012, The Boxcar Children for Violet, 2014, and The Little Prince as the Little Girl in 2015. Mackenzie Foy is scheduled to play the role of Clara in the 2018 film, The Nutcracker and the Four Realms with others like Misty Copeland and Morgan Freeman.

Mackenzie Christine Foy was awarded the Worst Screen Couple at the Golden Raspberry Awards for the film The Twilight Saga: Breaking the Dawn Part 2 and the Worst Screen Ensemble for the same film at the Golden Raspberry Award in 2013. In 2015, she won the Best Performance by a Younger Actor at the Saturn Awards for the film Interstellar in 2015. Foy has also been nominated for several awards.