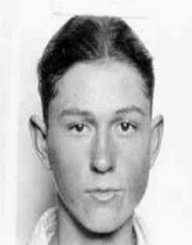 Famous as the other half of the Bonnie and Clyde duo, Clyde Barrow was part of a gang of problematic outlaws who went on many sprees of robbery and counts of murder until their death.

An Unassuming Child was Born

Clyde Chestnut Barrow was born as the fifth of seven children on March 24, 1909, in Ellis County, Texas. His parents were Henry Basil Barrow and Cumie Talitha Barrow who were from poor origins. They relocated later to West Dallas in the early 1920s where the whole family lived off of a tent bought by the older Barrow.

The young Clyde Barrow was a keen and unlikely child who had dreams of becoming a musician and attended school until the age of 16. He learned how to play the saxophone and guitar in the pursuit of his goals but later dropped all of it due to the influence of his older brother, Buck.


A Lifetime’s Worth of Crime

Clyde Barrow steadily pursued a life committed to crime starting with small ones to stealing of automobiles. His first recorded arrest was on 1926 when Barrow ran from a police confrontation in regards to a rental car that was not returned on time.

Ironically enough, Barrow and his brother had steady jobs to support themselves from 1927 to 1929 yet still turned to crime. Hence at the age of 20, Barrow had been a wanted fugitive for multiple cases of robbery in 1929.

Clyde Barrow met Bonnie Parker the following year in 1930. He was immediately smitten with the 19-year-old Parker who shared the same sentiments. From there, the couple spent most of their days together until Barrow was arrested and sentenced to prison on the charge of multiple accounts of stealing cars.

With the two deeply attached, Parker aided in the escape of Clyde Barrow by smuggling a gun into prison for him. Barrow used the weapon for his escape on March 11, 1930, with a few other inmates but was ultimately recaptured and sentenced to 14 years of hard labor to Eastham State Farm on April 1930.

During his stay at the prison, Parker was sexually assaulted multiple times which led to his first killing. Barrow killed the sexually assaulting inmate by crushing his skull using a lead pipe. For this crime, another inmate who was serving a life sentence took the blame.

Gradually growing tired of the tedious labor, Barrow conspired with another inmate to chop off his toes to escape labor. Unknowingly, his mother also pushed for his parole, and on February 2, 1932, he emerged as a free man.

Though deeply etched in a life of crime, Clyde Barrow tried to turn a new leaf by working at a glass company but gave up due to constant harassment by the authorities. He returned to his life as a fugitive this time joined by his lover and formed the Barrow Gang.

The Barrow Gang mostly robbed gas stations and grocery stores that escalated to bank robberies that spanned the Interstate.

Clyde Barrow and his gang continuously robbed stores to raise funds and ammunition for the Eastham prison break-out. They rose to fame when Clyde had been convicted of murder for killing a store owner, securing a bounty on his head.

Intent on keeping a low profile, the gang camped out at Barrow’s older brother, Buck, and was joined by an additional member, W.D. Jones. Authorities later found out their hideout due to the neighbors growing suspicion which ended in a shootout.

The shootout ended up with the escape of the gang, the death of 2 police officers and an undeveloped roll of film where the pictures developed were used to display their photos for the media.

Clyde Barrow and his gang’s murder count went as high as nine people with most of the members of the law. They ultimately met their death at the hands of the authorities in an ambush attack orchestrated on May 23, 1934. The lovers died in a hail of bullets fired by the police.

Despite their notorious nature, the lovers’ relationship was heavily romanticized by the media starting with the1967 film Bonnie & Clyde by Arthur Penn.

Faye Dunaway and Warren Beatty took the role of the crime-frenzied lovers. Over the years, they left a substantial impact on the media that to this day, they are still used as a reference for lovers with questionable moralities.