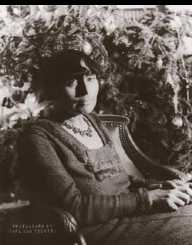 Alice Babette Toklas was an American born Parisian avant-garde cookbook author. Born on April 30, 1877, she is known as the partner of American writer Gertrude Stein. Toklas first worked for Stein as an assistant and the two later become romantically attached. She published several books including The Alice B. Toklas Cook Book published in 1954.

Alice B. Toklas was born on April 30, 1877, in San Francisco to Ferdinand Toklas and Emelia Levinsky. Born into a middle-class Polish Jewish family, she had a brother Clarence Ferdinand. The family later moved to Seattle. Toklas received education at Mount Rainer Seminary. With her aspiration to become a musician, she enrolled at the University of Washington to study piano. Toklas and the family returned to San Francisco after her mother became ill. Her mother died at the age of 41 in 1897. After the death of her mother, she became the caretaker of the family.

Devastated by the situation of her family and the challenges of the 1906 San Francisco earthquake, Toklas decided to leave the United States to Paris in 1907 alongside her friend Harriet Levy. This was where she met Gertrude Stein and that was the beginning of their long-term partnership and later relationship. She assisted Stein in her literary works including tying her manuscripts, serving as cook, lover, homemaker, and critic. The two moved into the same home in 1910 where they hosted a salon that attracted several American writers including Sherwood Anderson, Ernest Hemingway, Thornton Wilder, and Paul Bowles. Avant-garde painters like Braque, Picasso, and Matisse also visited the salon. With their affection for each other, they gave themselves pet names.

According to their work “Baby Precious Always Shines: Selected Love Notes Between Gertrude Stein and Alice B. Toklas,” Stein called Toklas “baby precious” and “wifey” while Toklas referred her as “husband” and “lovey”. Toklas continued to remain in Stein’s shadow until Stein died. In 1933, Stein published Toklas The Autobiography of Alice B. Toklas, which became a bestseller and made Toklas famous.

Life After The Death Stein’s Death

The relationship between Stein and Toklas was not recognized legally at the time but Stein tried her best to make provisions for Toklas to ensure she lived a good life after her death. She willed a sizeable part of her estate to Toklas including some valuable art collections. However, since Stein’s family did not recognize their relationship, they claim all the paintings. With this, Toklas began to rely on friends and later started writing.

She published the popular book, The Alice B. Toklas Cookbook in 1954, which comprised recipes and stories of her life with Stein. A particular recipe for Hashish Fudge, which was a combination of cannabis, spices, nuts and a mixture of fruits became very controversial. This led her to being named after a range of cannabis concoction, Alice B. Toklas brownies. In 1958, she published the cookbook Aromas and Flavours of Past and Present with contributions from Poppy Cannon. Aside for her own works, Toklas also contributed articles for newspapers and magazines including The New York Times and The New Republic. Toklas published her autobiography What is Remembered in 1963.

Toklas battled poor health and financial problem in her later years. She was evicted from the apartment she shared with Stein. She suffered from arthritis and cataracts and depended on writers like Virgil Thomson and Janet Flanner for financial support. She also became a Roman Catholic during this time. Toklas died in poverty on March 7, 1967, at the age of 89 in Paris. She was interred beside Stein in Père-Lachaise cemetery.