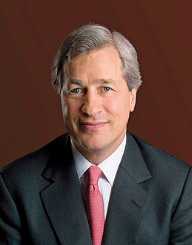 Jamie Dimon is an astute American financial mogul and business executive. Born on March 13, 1956, he is the CEO and president of JPMorgan Chase, a multinational investment bank and financial services company. On December 31, 2006, he became the chairman of the board of the company. Following the merger of JPMorgan Chase and Bank One Corporation in July 2004, he served as the President and Chief Operating Officer. Dimon served on the board of directors of the Federal Reserve Bank of New York. He has also served in diverse capacities in films like American Express Company, the Travelers Group, Commercial Credit Company, and Citigroup Inc. Dimon has about $485 million stakes in JPMorgan Chase. He is one of the highest earning bank executives in the United States.

Jamie Dimon was born on March 13, 1956, in New York City. His parents Theodore and Themis Dimon were Greek immigrants. His father was a stockbroker at Shearson. Dimon has two brothers Peter and Ted. To ensure their surname sounds French, his paternal grandfather changed the family surname from Papademetriou to Dimon.

Dimon received education at the Browning School. Following his graduation, he enrolled at Tufts University where he studied psychology and economics. Dimon worked at Shearson during a summer break at Tufts. Following his graduation, he worked as a management consultant for two years. Subsequently, he enrolled at Harvard Business School. His classmates at Harvard included Steve Burke, Jeffrey Immelt, Seth Klarman, and Stephen Mandel. Dimon worked at Golden Sachs, while on summer break at Harvard. In 1982, he graduated as a Baker Scholar with a Master of Business Administration degree.

After his graduation from Harvard, Dimon gained an opportunity to work with Morgan Stanley, Golden Sachs, and Lehman Brothers. However, Sandy Weil managed to convince Dimon to join him at American Express as an assistant. Therefore, Dimon turned down all offers from the mentioned companies. In 1985, Weill and Dimon left American Express. They subsequently took over control of the financial consumer company, Commercial Credit, from Control Data. Dimon worked there as a chief financial officer.

The company underwent several mergers and acquisitions. The company later integrated with Smith Barney, Primerica, and Travelers Group. Dimon since became chairman and CEO of Smith Barney in 1996. Solomon Brothers later merged with Smith Barney to become Salomon Smith Barney Holding in 1997. Travelers merged with Citicorp in 1998 to become Citigroup. Dimon, therefore, assumed the position of president of Citigroup. In November 1998, Dimon resigned from Citigroup, on Weill’s request during an executive retreat. Speculations are that they had some disagreements including Dimon’s refusals to promote Weill's daughter, Jessica M. Bibliowicz. He later revealed that Weill fired him.

Following his sack, Dimon joined U.S. fifth largest bank, Bank One, as CEO in 2000. J.P. Morgan Chase acquired Bank One in July 2004, hence, Dimon became president and chief operating officer of the merged company. He became CEO of JPMorgan Chase on December 31, 2005. The following year, he became president and chairman of the company. Dimon became a Class A board member of the Federal Reserve Bank of New York in March 2008.

Under Dimon’s tenure, JPMorgan Chase is currently the leading U.S. bank in domestic assets under management. In addition, the company led in public trade stock value and market capitalization value. During the financial crises in 2008, Dimon steered the affairs of JPMorgan Chase, ensuring that the company sailed through without a massive impact. In 2012, he became entwined in what became “London Whale.” JPMorgan Chase was involved in a $6 billion trading loss in the company’s London arm. Dimon suffered a pay cut because of the incident.

The Brendan Wood International ranked him among the "The TopGun CEOs" in 2009. In 2014, Dimon received $20 million including $18 million in restricted stock for his work in 2013. That year, the company witnessed a record profit. That notwithstanding, it also made some losses resulting from scandals and payment of fines.

Jamie Dimon married Judith Kent in 1983. They met at Harvard Business School. The couple has three daughters Kara Leigh, Laura, and Julia. In 2014, Dimon received a diagnosis of throat cancer. He, therefore, underwent eight weeks of radiation and chemotherapy.