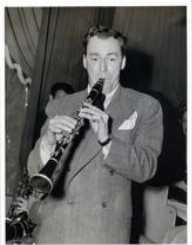 Woody Herman was a wonderful multitalented person. He was not only a jazz clarinetist and a saxophonist, but at the same time, he was a singer as well. Woody Herman was renowned for being the leader of one of the most popular bands that specialized in Jazz by the name of Thundering Herds. He led it for more than 50 years.  His performance mainly focused on the cutting edge music but also experimented side by side for which the entire band was not only nominated but also awarded Grammy awards for numerous performances.

Woody Herman or as named at birth, Woodrow Charles Herman was born on 16th of May in the year 1913 in Milwaukee, Wisconsin located in the United States. He was born to Otto and Myrtle Herman. His interest in the show business was ultimately the product of his father’s interest which influenced him as well. He was also considered as a child prodigy when it came to music as he started singing and dancing delivering his performances by the age of six in Vaudeville.

Woody Herman's talent was also recognized when he started playing saxophone and clarinet soon after his earlier performances. Following the same, he even released his first record by the name of “The Sentimental Gentleman from Georgia” by the age of 16.

Even though he had started to make a name for himself, he pursued his passion for music by studying about music at the Marquette University located in Milwaukee, Wisconsin for a term. He left the same and became a touring musician joining his first band in 1929.

While on one of the tours in the year 1931, Woody Herman met Charlotte Neste, who was also an inspiring actress and fell in love with her. The couple married each other on 27th September 1936.

Woody Herman's career started since the age of 6 only, and he got associated with the various bands throughout his life as a performer. His first band was Tom Gerun, and there he recorded his first song also performing with some of the legends at that time. Developing upon the same, he became a part of the Isham Jones Junior in the year 1934 but the same disbanded in the year 1936.

Woody used this opportunity to put his talent to the test and took to lead the band and ensemble the band with new members who later on started to be recognized as “Band That Plays the Blues.” With the new band, Woody was propelled to new heights of stardom with the success of their album by the name of ‘Woodchopper’s Ball’ in the year 1939, and they sold more than a million copies of the song.

The band now came to be recognized as Herman’s Herd and appreciated for showing exuberance and technical brilliance. This success opened various ambits for their band, and they also started doing their own Radio Show. They even got an opportunity to be a part of multiple motion pictures such as New Orleans. The career for Woods and his band took a completely different turn, and they started performing concerts at the Carnegie Hall.

The WWII took a hit at the band, and it caused the band to decimate, but this was surely not the end for Woody Herman. As after the end of WWII, he ensembled a second herd pioneering the combination of 3 tenor saxophones combined with a baritone saxophone which became the identity for the new band and associated the same with one of their songs by the name of ‘Four Brothers.’ But this herd could not last long, and it disbanded in the year 1949.

This did not stop Woody Herman, and he continued performing in various concerts and 1986, he even released a Woody Herman and his Big Band 50th Anniversary Tour.

Though in the 1980’s, his health declined mainly owing to tension to pay back the taxes which were owed due to faulty bookkeeping by his managers in the year 1960’s. He died in the year 1987.