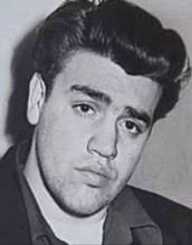 American Mafia crime boss, Vincent Gigante was born in Manhatten, New York on the 29th March 1928. His parents were Yolanda Santasilia Gigante and Salvatore Gigante. His father worked as a jewellery engraver and his mother as a seamstress. Gigante was a third-generation Italian-American with both sides of the family having originated in Naples, Italy.  He had four brothers: Mario, Pasquale, Ralph, and Louis.

Vincent Gigante was a pupil at Public School 3, West Village, Manhatten and then enrolled at Textile High School where he finished Grade 9.

In the 1940s, Vincent Gigante was a professional light heavyweight boxing professional. Out of 25 matches, he won 21. At some stage, Gigante began to feign mental illness. Certain people believed that it started when he pretended to be mentally ill to avoid military service.

Initially employed as a tailor, Vincent Gigante became involved with the Genovese crime family and was taken under the wing of the family patriarch Vito Genovese. He was arrested on charges of possessing unarmed weapons, illegal gambling, bookmarking and receiving stolen goods and served 60 days. He was a capo in the 1960s.

Gigante rose through the ranks until in the 1980s, when Anthony Salerno died, he became the boss of the Genovese family. As he rose to be the most powerful Mafia don in the country, he was shuffling around the streets of lower Manhattan in his pajamas, looking like a harmless, deranged person. The tabloids nicknamed him the Oddfather and Pyjama Don while his family claimed that he had a low IQ.

He ran the Genovese family ruthlessly while pretending to be a visionary paranoid schizophrenic. Because Vincent Gigante was so competent at pretending to be stupid, the police tended to overlook him as they searched for the king-pin capable of running the Genovese family. From 1969 until 1990, Gigante was in and out of mental hospitals and on a cocktail of drugs including Valium and Dalmore.

Then police intercepted communication between one of Gigante’s people, Anthony Salerno in which he commented upon Vincent Gigante having pretended to be insane for years. On the 23 January, 2002 Gigante was arrested. He was sentenced to 12 years in prison. Once in jail, he admitted to having run the Genovese family until 2003 from his prison cell. He also pleaded guilty to faking mental illness to obstruct justice and had three years added to his sentence.

Vincent Gigante married Olympic Grippa in 1950, and the couple had five children. He also had a relationship with Olympia Esposito and had three children with her. He died in jail on December 19, 2005.