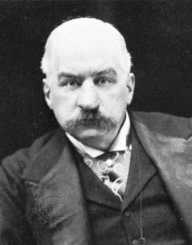 American bank and philanthropist John Pierpont Morgan Jr. was born on the 7 September 1867 in Irvington, New York. He was born into one of America's wealthiest families with his parents being J.P. Morgan and Frances Morgan. His father was the successful banker and art collector.

Morgan was educated at Harvard University obtaining a B.A. degree (1889).

After graduation, Morgan held various executives posts in the family-owned banking firms, and when his father died in 1913, he became president of J.P. Morgan & Co. (1913-1943).

Morgan was instrumental in winning the contract for munitions purchasing agent for the British government during World War I (1914-1918), and he was also involved in a syndicate of banks who underwrote war loans for the Allied governments.

During the Great Depression, Morgan was opposed to Franklin’s New Deal and was involved in securing loans in the region of a hundred million for Benito Mussolini, the Italian dictator.

A generous philanthropist, in 1924 Morgan donated father’s library and grounds to set up the Morgan Library & Museum.

Morgan had an assassination attempt on his life in July 1915 when a deranged person shot him twice in his Long Island home. The reason for the shooting was that the assassin claimed Morgan was profiteering from World War I.

His son, Henry S. Morgan, was a founder of Morgan Stanley, and his sister Anne Morgan was a noted philanthropist.

Morgan married Jane Norton Grew on the 11 December 1890, and the couple had four children. Their son Henry S. Morgan was the founder of Morgan Stanley.