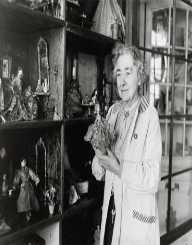 Lizzy Ansingh was born on March 13th, in 1875. She was an eminent painter of Dutch descent. She was one of the women that were greatly influenced by an impressionism movement identified as Amsterdamse Joffers. Due to her unique art talent, she joined the Arti et Amicitiae, an art group that exists to this day.

Lizzy Ansingh was born on March 13th, in 1875. Her birthplace was in Utrecht. Her father, Edzard Willem Ansingh worked as a pharmacist. On the other hand, Clara Theresia Schwartze, her mother was a professional painter. Painting talent was also something that her grandfather was blessed with. Ansingh took her first painting lessons from Thérèse Schwartze, her aunt, who was also a well-known painter. Schwartze helped her to nurture her young painting talent since she lived with her for 16 years.

Her loving aunt also opened doors of opportunities to Ansingh bearing in mind that she made promising introductions to notable painters. Some of the celebrated Dutch painters that she met along the way include Simon Maris, Piet Mondriaan, and George Hendrik Breitner.

In 1894, Lizzy Ansingh enrolled with Royal Academy of Visual Arts situated in Amsterdam. She studied here for three years completing her education in 1897. Some of the professors that aided her with her painting studies include August Allebé, Carel Dake, and Nicolaas van der Waay.

It is while studying at the academy that she developed a strong bond with other female painters and formed the Amsterdamse Joffers. This was a group comprised of Ansingh, Suze Bisschop-Robertson, Marie van Regteren Altena, Coba Ritsema, Jacoba Surie, Ans van den Berg, Nelly Bodenheim and others. The main idea behind the formation of the female painting group was to offer encouragement to young and upcoming female painters, particularly in the Netherlands.

Apart from gaining high acclaim through portrait painting, Lizzy Ansingh also earned a huge fan base through doll painting. Just like other forms of painting, she specialized in; it is her aunt that motivated her to try out this form of painting. Additionally, Ansingh wrote `n Vruchtenmandje - A little fruit basket and Tante Tor is jarig ¬-Aunt Tor has her birthday. These were children books published in 1927 and 1950 respectively.

Lizzy Ansingh never got married during her lifetime.