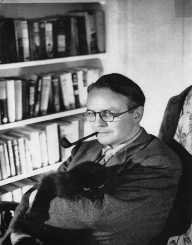 His parents were Richard Hammett and Anne Bond Dashiell, and he had two siblings, a brother, and a sister. The family lived in Philadelphia as well as Baltimore when Hammett was growing up.

After high school, Dashiell Hammett did a variety of low paid jobs including working as a messenger boy, freight clerk, and railroad laborer. He was then employed at Pinkerton’s Detective Agency in San Francisco as a detective (1915).

This experience working as a detective inspired his future career as a writer of detective novels. When World War I broke out Hammett joined up towards the end of the war and after the war, was honorably discharged with the rank of sergeant.

Dashiell Hammett was hospitalized in 1920, having spent the war working in the Motor Ambulance Corp and contracting tuberculosis. After returning home unwell, Hammett could no longer pursue his career as a detective, and he began submitting stories to various magazines.

In 1923, he had a story, Arson Plus, published in Black Mask, a popular detective periodical. He went on to have some stories published by Black Mask and developed the detective The Continental Op.

Dashiell Hammett's innovative short and sharp style with pithy dialogue and a lot of action was original and set him apart from other detective and mystery writers of the day.

Dashiell Hammett's first novel Red Harvest was published in 1928 and was followed by The Dain Curse (1929).  After the publication of these two novels, Hammett had established himself as a new voice in the genre and gained an enthusiastic following.

The Maltese Factor (1930) introduced his iconic character, Sam Spade. The book was a big success and was adapted for film with Humphrey Bogart in the role of Sam Spade. His next novel was The Glass Key (1931), and his final novel was The Thin Man (1934).

After the mid-1930s and the success of The Thin Man, Dashiell Hammett lived in Los Angeles and was employed rewriting scripts for the big studios as well as writing for radio.

Dashiell Hammett also joined the Communist Party in 1937 and was elected president of the New York Civil Rights Congress. When World War II broke out, at the age of 48,

Hammett joined up and was posted to the Aleutian Islands where he was a sergeant in the Signal Corps.

In his role as president of the NYCRC, Dashiell Hammett posted bail for various communists on trial for conspiracy. When they fled while out on bail, he was asked to provide information, which he refused to do.

His refusal to cooperate with authorities landed him in jail for six months during 1951. Because of his involvement in the Communist Party, Hammett was forced to appear before the Joseph McCarthy Senate Subcommittee.

The outcome was that his radio shows were canceled, and his books were banned.

Dashiell Hammett was married to Josephine Dolan between 1921 and 1937. They had two children: Mary Jane (b.1921) and Josephine (b.1926). Afterward his divorce, his longtime partner was the playwright Lillian Hellman.

In his later years, he retired to the county in New York State and lived in relative seclusion. Dashiell Hammett died on the 10 January 1961 and as a veteran, is buried at Arlington National Cemetery.

Dashiell Hammett contacted influenza as well as tuberculosis during World War I (1914-1918). In the 1940s, he was diagnosed with emphysema and died of lung cancer in 1961 at the age of 66. He also had a problem with alcoholism.