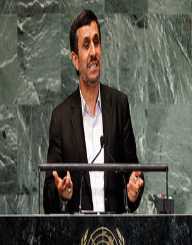 Mahmoud Ahmadinejad was born on October 28, 1956, in Abadan, Iran. His father was a Shia barber and owns a grocery store. He used to teach the Quran, and his mother named Khanom is apparently one of the direct descendants of the Islamic prophet Muhammad. Mahmoud Ahmadinejad studied civil engineering at the Iran University of Science and Technology. Mahd graduated from the same university with a Ph.D. in ‘transportation engineering and planning.

Mahmoud Ahmadinejad had shown preference politically when he was studying at the Iran University. Mahd secretly disseminated the propaganda magazine “Jiq va Dad’, which was an anti-Shah publication. Mahd was an active member of an Iranian student group called the Office for Strengthening Unity. The group aimed at assisting students in dealing with other leftist students groups.

Mahmoud Ahmadinejad became a governor of the province of Ardabil in 1993. But he was taken off from his post when Mohammad Khatami was in authority. He then began his teaching profession as a way to earn a living. Mahd formally took office as the mayor of Tehran in 2003. He made many reforms throughout his term. He stressed on religious matters and promoted charity. He also placed importance on traffic matters.

Mahmoud Ahmadinejad became the sixth President of Iran in 2005. He won the presidential election against the former President Akbar Hashemi Rafsanjani. As an Iranian President, Mahmoud Ahmadinejad became an international figure. He was known for his stand on Iran’s right to develop nuclear power. This created misapprehension among the international community. He maintained that Iran has within her rights to have the nuclear program and it was for the pursuit of peace. He rejected the claim that Iran was developing an atomic bomb.

Mahmoud Ahmadinejad appointed many senior officials in his government from among his family. Thereby, Mahd was charged with nepotism during his presidential term. Mahmoud Ahmadinejad's  party lost in the Iranian council elections in 2006. He retired many Iranian scientists and professor at that year. Mahd aimed to endorse younger talents in his country. But this led to the first major student protest against him since he came to power. Mahmoud Ahmadinejad was admonished for apparently disregarding human rights and accused of economic mismanagement. He developed in 2007 a special ‘gas rotating plan’ to cut down fuel consumption.

Return To The presidency

Mahmoud Ahmadinejad served his second term as the President of Iran in 2009. He defeated Mir-Hossein Mousavi. Mousavi’s supporters of electoral fraud accused him. The people also suspected election fraud. The Iranian themselves was suspicious about the electoral result. The Supreme Audit of Iran reported in February 2009 a total of $1.058 billion oil surplus revenue. It was apparently, unaccounted for and not returned to the government. A further investigation on the matter was asked and led by the parliamentary speaker, Ali Larijani. In July 2009, Mahmoud Ahmadinejad fired four of his ministers. His government was in a serious dilemma as a result of his decision. This was because if more than half of the cabinet members were replaced, the decision would remain invalid until a re-approval. This was by the Iranian constitution.

Mahmoud Ahmadinejad continued to create controversy on the international community for his remark on the 9/11 attacks. This happened during the 56th session of the United Nations General Assembly in 2010. The following year, he made similar statements on the matter. An impeachment of his office by many of the Iranian parliament loomed in 2011. He merged eight government ministers and removed three ministers without prior notice to the parliament.

Mahmoud Ahmadinejad's  party was defeated during the 2012 parliamentary elections. Mahd was questioned in March 2012 by the Islamic Consultative Assembly for issues relating to his presidency. He was the first Iranian President to undergo such rigor. ' Mahd finished his Presidential term in 2013. Eventually, he left the official residence of the President of Iran. Hassan Rouhani was elected as his successor. Then in the same year, he was appointed as a member of the Expediency Council.

Mahmoud Ahmadinejad served as the sixth President of the Islamic Republic of Iran. He was one of the most important leaders of the coalition of conservative political groups the Alliance of Builders of Islamic Iran. Mahmoud Ahmadinejad was the Iranian President for two terms from 2005 – 2013. Ahmadinejad hailed from a poor background of the Shia Family. He was born in Abadan, Iran. He is perhaps best known for his defiance against the western interests and his defense of the right of his country to develop weapons of mass destruction. This he has harped on as a show of deterrence against unfriendly nations.

As a result of his oft-cited Islamic nationalism, Mahd has a reputation of patriotism across his country and the Muslim world. Many people who look to call the bluff of American and NATO dominance see a ray of hope in this leader. He openly called for the annihilation of the Israeli nation at several fora over the last decade. He courts controversy and is an enfant terrible to the west at the moment.

Mahmoud Ahmadinejad is known to be forthright in his opinion and has an argumentative nature. Mahd had opened the way for women in Iran to attend major sporting events. Mahd has a puppet look-alike on a French show called ‘Les Guignols de l’info.’ This animated series was created as a satire of the Ahmadinejad presidency.

Mahmoud's wife is called Azam Farahi, and they got married in the year 1981. The couple has three children from their union.