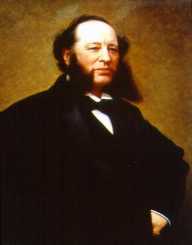 Commodore Cornelius Vanderbilt, as many called him was born in Port Richmond, Staten Island, New York to Cornelius van Derbilt and Phebe Hand on 27th May 1794. His ancestors were from the town of De Bilt in the Netherlands. A year after he was born, his family moved to Stapleton, New York. Vanderbilt started working for his father at a very early age in the New York Harbour. He quit school at the age of 11 and began his ferry business at the age of 16.

It is reported that Cornelius Vanderbilt took a loan of 100 dollars from his mother to buy his small sailboat. He charged as low as 18 to 25 cents for a round trip. He believed in charging very little for his services which were a style he was known for even as his fortune grew. He would undercut competitors’ fares while still offering them the best service. This gained him more standing and made competition stiff for the others in his field.

Cornelius Vanderbilt made about 1000 dollars in his first year of business.  By the time he was 23, his capital was about 10,000 dollars, and he had a fleet of five coasting vessels that went from Boston to Delaware Bay along with his ferry business. In 1859, he built a railroad across Panama and formed the Atlantic and Pacific Steamship company.

The civil war of 1812 brought with it chances for the growth of his business as Cornelius received the much-coveted government contract to build the much-needed forts around New York City. Four years later, he sold all his vessels and became a steamboat captain. He also became a partner with Thomas Gibbons who had a ferry service that went from New Jersey to New York.

Cornelius Vanderbilt used his method of charging less than the competition, and it worked for the business churned in a vast amount of profits. His business kept growing by leaps and bounds. By the 1840s, he was the most significant employer in the entire United States with a fleet of 100 steamships to his name.

In the building of his fortune, his business acumen always worked for him. Cornelius Vanderbilt took on and crumbled monopoly anywhere he came in contact with it. He only suffered a setback twice in his business. One time was when he took his first vacation and nearly lost his business to the usurpers who he had left in charge.

The second was trying to compete with the low prices of the British Cunard Steamship Line. This line plied the North Atlantic passenger service route and more importantly was subsidized by the British government so there was no way a private service could have offered lower prices. He recovered from these quickly enough, however.

Towards the end of his life, Cornelius Vanderbilt turned his business over to William Henry who convinced him to expand rail service to Chicago. To do this, they bought a couple of railways including the Canadian Southern and Michigan central railroad making them the most extensive railway transport system at the time.

Despite his vast wealth, Cornelius Vanderbilt lived modestly. He never cared much for extravagance or high society. He was considered uncultured and vulgar, with an obnoxious grammar and illegible handwriting. All these factors never bothered him.

He had a reputation for being a ruthless businessman. He is known for quotes like:

‘You have undertaken to cheat me. I won't sue you, for the law is too slow. I'll ruin you’.

‘If I had learned education I would not have had time to learn anything else.’

Notwithstanding, he was well respected. Parents were often heard admonishing their children about a man who came from a poor background and built himself such immense wealth.

The Commodore Cornelius Vanderbilt was a believer in the occult. He was known to consult with mediums.

On December 19th, 1813 at the age of 19, Cornelius Vanderbilt married his 18-year-old first cousin, Sophia Johnson. This union was discouraged by his parents, but he did it anyway. The couple had thirteen children. In 1868, Sophia died, and he felt her loss deeply as she was a smart businesswoman who consistently gave him sound advice and support in his various business decisions.

At the age of 73, a year after Sophia’s death, he married another of his cousins, Frances Armstrong Crawford. She was about forty-three years younger than he was.

Upon his death, he left about 95 percent of this wealth to his fourth child and oldest son William Henry. He was the only child who paid attention to the business and whom the Commodore felt was capable of maintaining his empire. He shared the rest among his other children.

Cornelius Vanderbilt had never been one to donate to charity.

His second wife, however, had a way to get through to him. It was at her insistence that the Commodore received Bishop Holland Simmons Nimmons McTyerie, a Methodist Bishop in 1873. He was able to persuade Vanderbilt to donate to a University in the war-scarred South.

Upon his death, Vanderbilt donated one million dollars to Nashville Central University that became Vanderbilt University, Nashville, Tennessee. The athletes there are called Commodores in his honor.

In early 1876, Cornelius Vanderbilt became bedridden as a result of exhaustion. It was said by his doctors that there was scarcely any functional organ in his body. He was bedridden for eight months.

Cornelius Vanderbilt had come from a relatively poor background. He ended up being one of the wealthiest men in America. At his death, he had a net worth estimated at over 100 million U. S. Dollars.