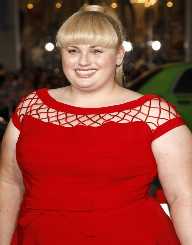 Rebel Melanie Elizabeth Wilson was born on March 2, 1980, in Sydney, New South Wales, Australia. She grew up in Parramatta and Castle Hill and attended the Tara Anglican School for Girls. In 1997, Wilson finished high school and earned a second place in state food technology competition. She has two sisters and a brother. Her sister Liberty and brother Ryot both participated in The Amazing Race Australia in 2011.

After graduating high school, Wilson attended University of New South Wales, which she graduated in 2009 with Bachelor of Arts in Theater and Performance Studies and Bachelor of Laws degree. She was the Rotary International Youth Ambassador for Australia and lived in South Africa for one year. During her time in South Africa, she contracted malaria, which caused hallucinations. Wilson claimed that she saw herself winning an Oscar, which convinced her to pursue a career in acting.

After making her decision to pursue an acting career, Rebel  Wilson began studying at the Australian Theatre for Young People. After winning the Theater’s international scholarship, Wilson moved to New York. Nicole Kidman funded the scholarship. In New York, Wilson trained at The Second City. Her name came to public attention in 2002, when she wrote, starred and produced the musical The Westie Monologues. This production was followed by Spunks and Confessions of an Exchange Student.

Upon moving to the United States, Rebel  Wilson signed to the agents William Morris Endeavor. Her first Hollywood role was in the Judd Apatow film Bridesmaids. After her Hollywood break, she appeared in the CBS sitcom Rules of Engagement and the Comedy Central series Workaholics. In 2011 she starred in the Australian A Few Best Men and filmed a role in Small Apartments. The Variety Magazine named her as one of the Top Ten Comics to Watch for 2011. Her next project was in the film What to Expect When You’re Expecting, and a role in the indie film Struck By Lightning.

Wilson’s most praised role in Hollywood came in 2012 when Wilson starred in Pitch Perfect. She received nominations for Best Supporting Actress from San Diego Film Critics Society and the Broadcast Film Critics Association. She won the MTV Movie Award for Best Breakthrough Performance and the Teen Choice Award for Choice Movie Actress. After her success, Wilson landed a role on Super Fun Night. The series was canceled after one season. The same year she also played Robin in Pain & Gain and hosted the 2013 MTV Movie Awards.

In 2015, Wilson starred in Pitch Perfect 2 and will start in the third movie in 2017. Her next film project was comedy How To Be Single in 2016. She also had a cameo role in the movie Absolutely Fabulous: The Movie.

Besides working on screen, Wilson has worked on stage. Her most recent project was the role of Ursula in The Little Mermaid in the all-star concert at The Hollywood Bowl. In August 2016, she made her West End debut with a role in musical Guys and Dolls.

Rebel  Wilson has been the spokesperson for weight loss and nutrition company Jenny Craig in Australia. She lost 10 kg since she signed up for the program. However, the Pitch Perfect producers refused to let her lose weight since her contract asked her to stay the same size. This led to the ending of her contract with Jenny Craig. Wilson has been outspoken about gun safety.

In 2012, Wilson began dating her Bridesmaids co-star Matt Lucas. The couple lived together until 2015 when they broke up.