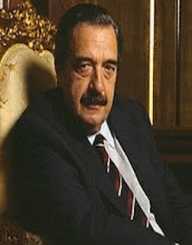 Argentine politician Raul Alfonsin was born Raul Ricardo Alfonsín Foulkes on the 12 March 1927 in Chascomus, Argentina to Serafin Raul Alfonsin Ochoa and Ana Maria Foulkes. His father was a prosperous shopkeeper, and his mother had a Welsh father and a Falkland Islander mother.

After his early schooling, Raul Alfonsin attended the General San Martin Military Lyceum. He reached the rank of second lieutenant and then enrolled at the National University of La Plata and the University of Buenos Aires where he studied law.

Raul Alfonsin founded a newspaper and then entered politics with the Radical Party (UCR), in opposition to Peron’s Justicialistas. Peron’s government imprisoned him in the 1950s.

Raul Alfonsin was elected to Congress in the early 1960s and his period in government saw two military coups (1966 and 1976). Within the UCR, he was the leader of a left-wing faction, the Renovation and Change Movement.

When Argentina was under a military dictatorship between 1976 and 1983, Alfonsin opposed the generals and was a co-founder of the Permanent Assembly for Human Rights. He also criticised Argentina’s invasion of the Falkland Islands in early 1982 which led to war the Falklands War with Britain. Alfonso beat Italo Luder, the Peronist candidate in the October 1983 elections and his stated aim was to have a modern democracy in Argentina without military dictatorships and political instability. Opposition from the military to being tried under civilian law led to the Full Stop Law (1986) and led to an uprising in early 1987 led by Lieutenant Colonel Aldo Ric.

Another way to ease the problem of military convictions led to the Due Obedience law. This law saw 84 senior officers being held responsible for human rights abuses, but eventually, they were all pardoned by President Carlos Menen as were the Rico uprising officers. Apart from military matters, Raul Alfonsin had to deal with foreign debt, massive inflation and struggling state enterprises.

He introduced a new currency, the austral as part of his austerity programme. The economic plan failed to control inflation, and in September 1987, the party lost its parliamentary majority. Alfonsin’s government saw inflation rise to over 4,000%; supermarkets looted and rioting, factory closures, layoffs, and power cuts. Raul Alfonsin resigned, and in July 1989, the Menem government was sworn in.

Raul Alfonsin remained a respected political figure and, as a senior statesman, he continued his involvement in politics. He was a member of the South American Peace Commission, Vice-President of Socialist International and a senator for Buenos Aires Province (2001).  He also established the Argentine Foundation for Freedom of Information.

Raul Alfonsin was a recipient of the Princess of Asturias Award for International Co-operation (1985). In 2008 and 2009, Alfonsin was declared an Illustrious Citizen of Buenos Aires Province.

In 1949, Raul Alfonsin married María Lorenza Barreneche, and the couple had six sons.

Raul Alfonsin Foulkes died on the 31 March 2008. There is a bust of Alfonsin at the presidential palace in Buenos Aires.