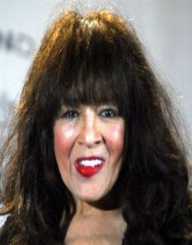 Veronica Yvette Bennett known in the entertainment industry as Ronnie Spector is an American rock and roll singer. Born on August 10, 1943, she is the lead singer of the female rock/pop group, Ronettes. Affectionately known as "The Bad Girl of Rock & Roll" she had some hits with Ronettes including Be My Baby, and The Best Part of Breakin’ Up. After a successful group career, Ronnie went solo in and has five studio albums to her credit.

Her albums include Siren, Unfinished Business, Something's Gonna Happen, Last of the Rock Stars and English Heart. The Ronettes were inducted into the Rock and Roll Hall of Fame in 2007.

Ronnie Spector was born Veronica Yvette Bennett on August 10, 1943, in New York City to an Irish American father and an American/Cherokee mother. She has a younger sister Estelle. Raised in Spanish Harlem, Ronnie fell in love with music at a very young age and her uniquely powerful voice coupled with striking beauty became her tool for success.

Along with her younger sister and cousin Nedra Talley Rose, they formed the group, The Darling Sisters, which later became Ronettes. They started performing as dancers at local shows including at the Peppermint Lounge in New York.

Ronettes had their share of the downside of music at the initial stage. In the 1960s, they earned a contract with Colpix Records and were produced by Stu Philips. The group recorded some singles for the label but without success. Desiring more significant achievements, the Ronettes changed labels by signing to Phil Spector’s Phillies Records.

This deal came at the right time at it shot Ronettes to instant success. They recorded hit singles like Be My Baby, Do I Love You?, Baby I Love You, The Best Part of Breakin’ Up and Walking in the Rain. In 1965, the group’s "Born to Be Together" and "Is This What I Get for Loving You?" charted in the top 100 hits. The group disbanded in 1967, after a European concert tour.

In 1969, Ronnie Spector recorded "You Came, You Saw, You Conquered," for A&M Records and that began her long hiatus from the music industry. Two years later, she recorded the single Try Some, Buy Some/Tandoori Chicken at the Abbey Road Studios. It was released as Apple 1832 in the US and Apple 33 in the UK.

Ronnie Spector fell in love with Phil Spectra and married him in 1968. The union impeded her music career, with domineering Phil insisting she quit and instead be a mother and take care of the house. He stopped her from performing by sabotaging her career.

The couple adopted a son Donté Phillip Spector in 1968 and two years later took twins, Louis and Gary. According to Ronnie, the more children brought home, the more she remained in the house and had to escape if she has to go out. Ronnie recounts how she managed to escape from a home in her memoir Be My Baby: How I Survived Mascara, Miniskirt and Madness, 1990.

She stated that she escaped from home barefooted in 1972, with the help of her mother, adding she would have died if she did not leave the house. Phil had guarded the house with dogs and barbed wire and seized all her shoes. Ronnie began to take solace in alcohol and that in a way helped her to leave the house in the name of attending Alcoholics Anonymous meetings.

Ronnie Spector noted that Phil installed a gold coffin with glass top in the basement, threatening that if she ever left him, he would kill her and display her corpse. The couple divorced in 1974. For fear of her life, Ronnie surrendered all future earnings from her records because Phil threatened to have her killed. Her settlement included $25,000, a monthly allowance of $2,500 for five years and a used car.

After successfully breaking up with the obsessed Phil, Ronnie Spector made a music comeback. She tried to revive Ronettes, but this time as Ronnie Spector and the Ronettes with members Chip Fields and Diane Linton.

Since she was seen as an ‘oldy,’ she struggled to make any positive impact in the 1970s and early 1980s. She did a duet with Southside Johnny on "You Mean So Much To Me" in 1976 for the Johnny & the Asbury Jukes' debut album, I Don’t Want to Go Home.

Ronnie Spector launched a solo career recording the debut album in Siren in 1980 produced by Genya Ravan. The album failed, and it was not until 1986, that he enjoyed some success with the duet “Take Me Home Tonight” with Edie Money.

The success earned her a contract with Columbia, which she followed with the album, Unfinished Business in 1987. She released the EP She Talks to Rainbows, 1999. Her albums include Something's Gonna Happen, 2003, Last of the Rock Stars, 2006 and English Heart in 2016.