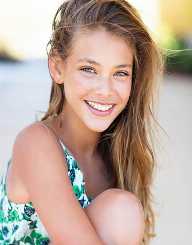 Laneya Grace was born in the American state of California on 23rd June 2004. Her father is Thomas Stevenson, and he is thought to be of Indian descent. Laneya is reputed to have begun modeling at the tender age of 3. There are little or no details about her mother, and she is thought to have been adopted by her father.

Laneya Grace cuts a look that is no doubt photogenic and mesmerizing.Laneya has a pair of green eyes with glittering hue and a personality that can be rightly described as radiant.

This child star could be described as having been born into stardom as she did not have to walk the long road to renown. Laneya Grace has appeared in skits made for elite brands and has become a hit with photographers and agents.

Laneya Grace has been in front of the glitz and glimmer of cameras for more than a million times already at her age. Laney's scintillating élan and presence of form and physique is an enchanting one to behold. Her carriage is one that tells of mastery that many models who are years older than her are still grappling to get a hold.

Some of the campaigns that Laneya Grace has graced include the run for top brands like Maleficent Toys and the top-notch designer label, Guess. Grace was also featured in the video for Avicii’s song, “Wake Me Up.”

The descriptions that suit Laneya Grace are replete with words like cherubic, graceful and cute. Laneya Grace puts out a convivial charisma, sheer attractiveness, and brilliance that a seasoned photographer will love.

Laneya Grace has a poise that puts her across as one who was born with an inbuilt ability to grace the limelight. Grace can present the appearance that every image recording requires to the desired perfection.

As a child model, Laneya Grace has accumulated handy experience that will propel her to the front row when she comes of age to mount the big stage. Grace's displays on the Wilhelmina Models sure gave the rave reviews that brought her to the awareness of industry players.

When Laneya Grace graced the set of “Wake Me Up” for Avicii, alongside Kristina Romanova and Aloe Blacc, she was leaping the public domain. The music video was a lead single that was released by the Swedish electronic music star, Avicii, who also doubles as a music DJ. The album was titled “True” and was released by Lava Records in conjunction with Columbia Records and PRMD Music. The release date was 17th June 2013.

The publicity that came with the stint forLaneya Grace was worth the while as the song which was written by Aileen Quinn with names like Marianne Marie Marantz, David Geffen, Lee Ann Womack and Jonathan McHugh, was well received.

Names like Aloe Blacc, who provided added vocals for the song, offered an added mileage for the overall attraction of the song. It was no wonder that Laneya indeed got a lift for the feature in Wake Me Up!

The attraction that Laneya Grace offers is such that tells a story as she made her mark at a tender age of 3. Many will think that such an age is not one to become notable but with Laneya, this was different.

The stage surely has its processes that cannot be ignored, but a few sees it as a huge milestone that is not easily attainable. Getting a contract with Wilhelmina Models as a toddler was one that was undoubtedly a big step forward.

Laneya Grace is followed on social media with such remarkable numbers. Although the account is managed by her father, it shows a great deal of the sights, features, and work of this toddling prodigy.

On Instagram, Laneya Grace has a following of 233,000 while she has hit the 6,000 mark on Twitter. On Facebook, she has 11,000 likes, and this explains the surge in her social media profile across the platforms.

Growing up in an urban center like San Francisco with all of its attractions perhaps played a role in the ease with which Laneya Grace fused into her stagecraft. Getting to meet many people at the mall, stores and the great outdoors gives the lift needed to blend with the crowd.

While the place of guidance and parental support cannot be overlooked. The flair to be outright and stylish helps a lot in the modeling game. Personality development allows models to handle the demands of the profession and with Laneya Grace, this is no different.

While the music video appearance with Avicii is a big step going forward, it is expected that this youngster will mature into a runway buzz as the years roll. The fascinating looks and demeanor can be identified as vital traits that are going well for her.