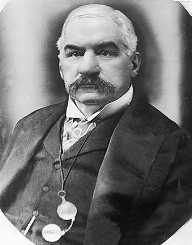 Hailed as America’s most celebrated banker and master of finance John Pierpont Morgan was born on April 17, 1837, in Hartford, Connecticut, the United States to Junius Spencer Morgan and Juliet Pierpont. His father belonged to the influential Morgan family of Hartford and was an affluent financier. He received his primary education in several schools according to his father’s plans. In 1848, he joined the Hartford Public School and then went to Episcopal Academy in Cheshire, Connecticut (Cheshire Academy at present).

J. P. Morgan cleared the entrance examination for The English High School, Boston in September 1851. It was a school which specialized in teaching mathematics and was ideal for students who aimed for a career in commerce. However, as he was diagnosed with a very severe Rheumatic fever, he was sent to the Azores, an Archipelago in Portugal for convalescence. He returned to Boston after his recovery and resumed his studies in The New English High School.

After his graduation, J. P. Morgan learned French in a Swiss school near the Swiss village of Vevey in Bellerive. His father wanted him to better his proficiency in German and sent him to the University of Göttingen. Morgan completed his formal education with a degree in Art History and a relatively decent knowledge of German from the University.

Two incidents from his early life show the extent of his business acumen and ingenuity. In the first instance, Morgan came across a ship captain with a boatload of coffee and no buyer when he visited New Orleans on a business tour. He purchased the coffee with the company’s fund in his possession and sold it to local merchants for a profit. In the second incident known as Hall Carbine Affair, Morgan purchased five thousand rifles from an Army depot at $3.50 each. He resold the guns to an Army general at the rate of $22 per rifle. It was the time when the American Civil War was underway.

In 1857, J. P. Morgan started his career at the London branch of merchant banking firm Peabody, Morgan & Co. It was a partnership started three years earlier by his father and George Peabody. In 1858, he came to New York and joined the New York banking firm Duncan, Sherman and Company as an Accountant. The company was the American representative of George Peabody and Company. He worked as an agent of his father’s banking company in New York City from 1860-1864, which was renamed as J.S. Morgan & Co. after the retirement of George Peabody in 1864.

J. P. Morgan became a member of the firm Dabney, Morgan and Co. in 1864 and continued to serve there as an influential member till 1872. In 1871, Morgan formed a partnership firm titled Drexel, Morgan & Co. joining hands with the Drexels of Philadelphia. The company partnering Morgan and his mentor Anthony Drexel soon became a significant source of American Government financing.

One of J. P. Morgan's most notable works is the reorganization of railroads which he started in 1885. He facilitated an agreement between two of the largest railroads in the United States, the New York Central Railroad and the Pennsylvania Railroad, thereby diminishing the probabilities of a disastrous rate war and rail line competition between the entities. In 1886, he restructured another two major railroads to balance their financial bases.

Among all these corporate restructurings, Morgan became a member of the Board of Directors of some railroad companies thereby assuming the role of a very influential player in the functioning of these companies. He went on to hold the major shares of the reorganized railroad companies and became one of the world’s greatest railroad baron. By 1902, he controlled around 8000 kilometers of American Railroads.

In 1890, his father J.S. Morgan passed away. After a hectic decade of reorganization of railroad companies, J. P. Morgan engaged himself in financing a series of giant industrial consolidations instrumental in reshaping the American manufacturing sector. The first and foremost of such reconsolidation was the unification of Edison General Electric and Thomson-Houston Electric Company leading to the formation of the General Electric. After the merger, General Electric became a prime manufacturer of electric equipment in the United States.

As an immediate consequence of depression caused by the Panic of 1893, the American Federal Treasury was nearly out of gold. To prevent the impending Treasury crisis, Morgan provided the necessary financial support to the U.S. Government.

After his father’s death, J.S. Morgan & Co. also came under his control. In 1898, J. P. Morgan financed the establishment of the Federal Steel Company. As there was a huge requirement of steel in the rail and train coach manufacturing industries, Morgan went on to find and acquire many steelmaking companies. In 1901, he merged the giant Carnegie Steel Company with several other steel manufacturing companies to form the United States Steel Corporation, the first billion-dollar corporation in the world.

Again in 1902, Morgan facilitated the formation of International Harvester Company after merging several leading agricultural equipment manufacturing company. Eventually, Morgan expanded his business in various other sectors of the financial and industrial worlds providing fiscal sponsorship to insurance, coal mines and communication industries. He acquired and consolidated several banks and insurance companies during the stock market panic of 1907. Morgan was also a well-known philanthropist.

In 1861, J. P. Morgan married Amelia Sturges who was the daughter of a prosperous merchant. Unfortunately, Amelia passed away in February 1862 due to tuberculosis. In 1864, Morgan started romancing Frances Louisa Tracy, the daughter of a New York-based lawyer, which culminated into their marriage in 1865. They were blessed with four children.

On March 31, 1913, J.P. Morgan breathed his last while in sleep at the Grand Hotel in Rome, Italy. The mortal remains of this illustrious son of America are entombed in Cedar Hill Cemetery, Hartford, Connecticut, United States of America.