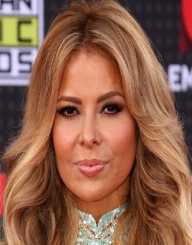 Gloria Trevi is a Mexican born singer and a songwriter. She was born in Monterrey on February 15th, 1968. On her first debut in the 90s, Trevi managed to earn herself fame in the music industry. QueHagoAqui? - Translated ‘what am I doing here’ was released in 1989 after which it topped the charts that year. It did not take time before her career fell apart. This occurred after Trevi and her manager, Sergio Andrade were accused of sexually abusing and corrupting minors.

Sources claim that they were also accused of kidnapping minors. After these allegations, the couple escaped Mexico but they were later arrested and jailed in Brazil. After serving time in prison, Trevi was released and she tried her best to rekindle her music career.

Gloria de los ÁngelesTreviño Ruiz AKA Gloria Trevi was born in Monterrey, Mexico. She was the eldest daughter in a family of five. Trevi’s career began when she was still a toddler. During this time she used to entertain people by reciting poems. She also enrolled for piano and ballet lessons.

At the tender age of 10, her parents separated. This devastated Trevi and when she was 12 years old, she escaped from where she lived with her mother. She fled home at this age heading to Mexico with the dreams of pursuing the career she had in mind. She wanted to be an entertainer. She did the best she could earning money from any possible means including dancing out in the streets.

Four years later, Gloria Trevi met with Sergio Andrade, who was 28 years old. Andrade became her mentor as she was still young and tender. In 1985, Trevi became a member of a young band called Boquitas Pintadas. This meant ‘Little Girls with Lipstick.’ Shortly after, Trevi thought it wise to go solo in her career. Andrade would act as her manager. She then released her famous album QueHagoAqui? - What Am I Doing Here? (1989). The record was a significant hit, and she became famous overnight.

The following years were a success to Trevi’s career as she released 5 other albums. During the period of 1991-1996, she was also featured in 3 Mexican films that were prosperous. In 1992, she toured south America and the Caribbean. Her music was loved by many as she was considered to be quite outspoken.

In spite of the vulgar language Gloria Trevia was using in her music, she had become a household name. Young girls began to wear clothes just to resemble Trevi. She made the best out of her popularity to engage in public speaking advising teenagers on drugs, prostitution, sex, abortion and AIDS.

In 1998, the worst happened to Gloria Trevi after publication of De la Gloria al Infierno by Aline Hernandez. Translated - the title of the book was ‘From Glory to Hell’. Hernandez had initially worked with Trevi’s manager, Andrade. She was his backup singer.

From the book, Hernandez claimed that she and Andrade had been married when she was 13 years old. In 1996, Hernandez fled from Andrade claiming that he was a monster that turned young girls into disaster. Her book detailed everything including the relationship that Trevi was having with her manager. Hernandez wrote that Trevi was just as innocent as they were and that she fell in love blindly to Andrade.

Immediately after the publication of this book, several other girls who had been victims of Andrade’s cruelty came out to tell their stories over media channels. Allegations from other sisters claimed that Trevi and Andrade had sexually abused them after hiring them as backup singers.

Authorities had to make a move after such numerous accusations. Individuals that were charged for such corruption, sexual abuses and kidnappings were Gloria Trevi, Sergio Andrade and Maria Raquenel, who was their choreographer. Shortly after being exposed on the news, the suspects fled Mexico and were declared fugitives from then.

The Brazilian police soon caught up with the trio and arrested them in 2000.

Four years later after bitter experiences in prison, Gloria Trevi was released in 2004. Just after being released, she was determined to bring her old self back. She released several albums after prison including Como Nace el Universo (2004) and La Trayectoria (2006).