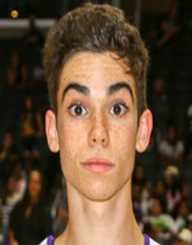 Cameron Boyce was born on May 28, 1999. His parents are Libby and Victor Boyce. He also has a little sister named Maya.

Cameron Boyce began acting in 2008 when he was only nine years old. Oddly enough, his first role was in a horror film called Mirrors. He also worked on several commercials before he got into television. He later moved on to doing more age-appropriate jobs when he signed on with Disney. He first worked for them as a child model for the Disney clothing line.

Later, with the same company, he starred alongside three other children (Peyton List, Karan Brar, and Skai Jackson) in Jessie, a show about a nanny who takes care of four affluent children in the city.

In the show, Cameron Boyce played a boy named Luke who was continually getting into trouble, dancing, and flirting with his nanny. This was his longest-running and most popular role with his fans so far. The character, Luke, has also appeared on several other Disney cartoons as a guest character.

Some of his other films and television shows are listed below

Cameron Boyce says in interviews that he has been dancing as long as he can remember. He loves to break dance, practice ballet, and dance to jazz and hip-hop music. Cameron Boyce is known in the world of breakdancing for his incredible skills. He showed off his dancing skills on his television shows as well, including Jessie and as a guest star on Shake it Up.  Cameron danced with the crew of X Mob, a dance group which he helped to form to show off his skills. In 2010, when he was eleven years old, he appeared in The Legion of Extraordinary Dancers.

In his short career, Cameron Boyce has already won one award: The Young Artist’s Award for the Best Performance in a Feature Film - Young Ensemble Cast (Judy Moody and the Not Bummer Summer). He has also been nominated for two others awards: The Behind the Voice Actors Awards for Best Male Vocal Performance by a Child and The Behind the Voice Best Vocal Ensemble in a Television Series - Children’s/Educational. He also had a nomination his vocal role in the Disney television series, Jake and the Neverland Pirates, in which he voices the title character.

Cameron Boyce also has a widespread Internet presence. He often posts on Twitter and Instagram. Many of his fans follow and like the pictures and videos he posts of himself, his friends, and his coworkers.

Even with his crazy work schedule, Cameron Boyce still knows how to have friends. One quote from his shows this better than any other. “I have crazy friends, so a lot of times when we're out, people recognize me on the street, but they will yell, 'This is Cameron Boyce!' and just run! They do that. Then I'm in the middle of the street with people looking at me.” This shows that he is still a kid at heart who knows how to have a good time.