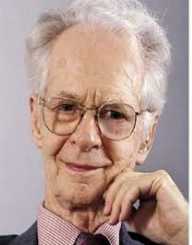 B. F. Skinner was born on March 20, 1904. He was an American psychologist. He was also a behaviorist, author, social philosopher, and an inventor. He was renowned for being Edgar Pierce’s Professor of Psychology at Harvard University and for developing behaviorism. He died at Eighty-Six years of age.

B. F. Skinner was born Burrhus Fredric Skinner on March 20, 1904, in Susquehanna, Pennsylvania. He was born to William Skinner and Grace Skinner. He was brought up alongside one sibling who died at the age of sixteen years.

He engaged at selling berries alongside his friend Raphael Miller. He later joined Hamilton College, New York to be a writer. In 1926, he graduated from the college with Bachelor of Arts to become a professional writer. He turned out unsuccessful in that field. In 1928, he joined Harvard University to pursue Psychology.

While at Harvard B. F. Skinner invented the Operant conditioning chamber (Skinner box) which was a tool he used to study animal behaviors. He at first used the rats, then pigeons. In 1931, he received his Ph.D. from Harvard University.

In 1938, he published his first book ‘The Behavior of Organisms.’ He later served as a lecturer at the University of Minnesota. In 1943, he invented the ‘Baby tender’ Air Crib which was a clear box for her daughter that was heated to release warmth.

In 1945, he was appointed the Indiana University’s Psychology Department’s Chairperson a post he held until 1947. In 1947, he went back as a lecturer at the Harvard University

. In 1948, B. F. Skinner became a professor hence staying there for the better time of his career. He later wrote interpretation concerning the ‘Walden two’ novel. He later invented the teaching machine. In 1953, he published ‘Science and Human Behavior’ where he talked about negative reinforcement. In 1968, he published his book ‘The Technology of Teaching.’

In 1973, he sang with the Humanist Manifesto II. In 1974, he retired. He later wrote and published ‘Beyond Freedom and Dignity.’ Other inventions he made included Cumulative recorder, Verbal Simulator, and Pigeon guided missile.

In 1942, B. F. Skinner received the Hoard Crosby Warren Medal from the Society of Experimental Psychologists. In 1968, he was awarded the National Medal of Science by the National Science Foundation.