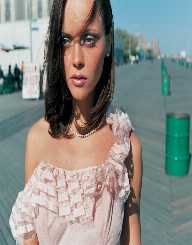 Christina Ricci is a world-renowned actress. Born on February 12th, 1980 the young star rose to stardom within a short period. Her place of birth was in Santa Monica, California. She appeared on her first film in 1990, Mermaids. She played the role of Kate Flax in this movie. The coming years after her debut was a success as she earned significant roles in some films.

In 1991, for example, Christina Ricci was featured in The Addams Family while playing the role of Wednesday Addams. Sooner or later, she went through an evolution as she began performing in adult-themed movies. Ten years down the line, Ricci had earned herself a top spot position in the film industry as she was highly demanded.

Christina Ricci is the daughter of Ralph Ricci and Sarah Ricci. Ralph was a lawyer while her mother Sarah was a realtor. Christina is the youngest daughter of 3 other siblings before her. Ricci schooled in Glenfield Middle School before school in New York at Professional Children's School.

From a tender age of 7, Ricci’s career had taken off. During this time, she appeared in some parody commercials. Christina Ricci made her first significant appearance in the film industry while she was only ten years old. In this movie, she played Kate Flax; the youngest daughter of Cher.

The Mermaids was indeed a stepping stone to young Ricci’s career. This is because, in 1991, she landed herself significant roles in the movies The Hard Way and The Addams Family.

While playing Wendy Hood in the 1997 movie Ice Storm, Christina Ricci had proved that she had indeed transitioned from being a child star to a teen star. In 1998, she was featured in The Opposite of Sex while playing as Dede Truitt. It is from this movie that she was considered for the Golden Globe award nominee.

By the time Christina Ricci was in her early twenties, she had rocked the film industry. She had been featured in over twenty movies from the time she was born. During the later 90s, she starred in several favorite films and TV series such as the Sleepy Hollow -1999.

In the films that Christina Ricci was featured, she is given a unique and dark character. For example, she is featured in the 2005 horror film Cursed. A year later, she played another dark role in Black Snake Moan. The trend of melancholy roles in movies goes on as she has played crucial roles in 2014 film Lizzie Borden Took an Ax.

While playing Kate in All's Faire in Love - 2009, she met Owen Benjamin and got married in 2008. Their relationship did not last long as they separated after three months. Her next boyfriend was also part of the TV series Pan Am, James Heerdegen. The two got married in 2011, and they are still happy together.

With over ten awards in her filmography, Christina Ricci is a star in her way. She has won some awards since 1991 including “Young Artist Awards” for her role in Mermaids. She also won SIFF Awards for Best Actress in 1998 for the movies Buffalo ’66 and The Opposite of Sex. Recently in 2001, she won the Hottest, Coolest Young Veteran award while at the “Young Hollywood Awards.”