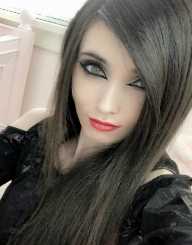 Born on July 27, 1994, Eugenia Cooney is an American rising social media enthusiast. In 2012, she won The Face of Big Drop NYC national contest. She is famous as a YouTube vlogger and gaining grounds with her video postings as several fans troop to her channel for makeup, beauty and fashion ideas. Eugenia is not only good at giving tips but also does challenge videos and has taken part in the ALS Ice Bucket Challenge. The sweet diva does not work alone as she sometimes features her mother and other guests in her videos.

Eugenia Cooney moved her YouTube career to another step as she featured in the Canadian series Degrassi: New Class, episode Too Many Fingers. Her role in the series was based on her life as a YouTuber and as to whether she was anorexic. This is because many have raised concerns about her skinny nature and believe she might be suffering from an illness.

Eugenia Cooney was born on July 27, 1994, was born in Connecticut, New England, United States of America. She has a sibling called Chip. She started her education at an elementary school in Connecticut and continued in an acting school in New York. Cooney lived with her parents until she reached an age she could cater for herself and has been living alone since.

Eugenia Cooney started her social media career after creating a YouTube channel on 17, 2011, which she solely used for vlogging at the time. She used to post videos of her daily life activities and other personal stuff. Her post later generated some followers, as her videos were unique. Aside from that, she also followed other famous YouTubers including Michael Buckley. Cooney then shifted her focus from only vlogging to giving tips on fashion, makeups, and beauty.

She also posted videos of challenges, which gained her many subscribers. Currently, she has more than 1.1 million subscribers to her YouTube channel. As an ardent follower of Michael Buckley, she followed him on YouNow, and his videos there motivated her to create a YouNow account. Cooney, just as she does on YouTube, started posting videos on that platform and that also gained her lots of followers. On YouNow, she has almost 620,000 fans.

Eugenia Cooney has many followers on her social media platforms, some of whom are genuine and other being her critics. There have been several concerns about her health issues as one can genuinely see she is suffering some illness by viewing her videos. She looks very thin and skinny, and that has got some fans talking with some perceiving her to be anorexic. Most of her fans show these concerns through their comments on her videos, but it seems such comments do not perturb her.

Eugenia Cooney instead threw back to some of her fans to rather stop watching her videos if they don’t like them than talking about her health issues. Some of her critics have even gone to the extent of asking petitioning against her on change.org asking YouTube to ban her channel. Some claim she is a wrong role model as some ignorant children are looking on to her skinny body to starve themselves to become lean.

Nonetheless, some of her loyal fans have always come to her defence, and that seems to be urging Cooney on. They argue that if even Cooney is genuinely sick, taking her off YouTube will worsen her case especially if YouTube is her only source of income. She has decided not to pay heed to her detractors of so-called “people showing concern” and give out her best to lovely fans.