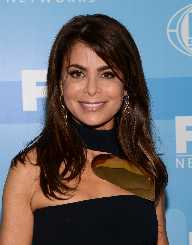 American singer and songwriter Paula Julie Abdul was born on June 19, 1962, in San Fernando, California. Her father Harry was born in Syrian-Jewish community in Aleppo, Syria was raised in Brazil and later emigrated to U.S. Abdul also has a sister.

Abdul was interested in music from an early age. She started taking dance lessons in ballet, jazz, and tap dancing. Abdul attended Van Nuys High School, where she was a cheerleader. As an avid dancer, Abdul received a scholarship to attend a dancing camp in Palm Springs. Her first screen appearance was in 1978 low-budget film Junior High School. After High School, she went to study broadcasting at California State University. She was selected for the Los Angeles Laker NBA team cheerleading squad her freshman year, but the next year she already was the head choreographer.

Abdul began her career as a choreographer. Band members from The Jacksons saw her performing at a Lakers game, and selected her to do the choreography for the single “Torture.” Her success with the video opened her many doors for a career in choreography. She was selected to work for the Jacksons’ Victory Tour. Through the 1980’s she choreographed several videos. Besides music videos, she also did choreography for several film projects, like Tom Hank’s keyboard scene in the movie Big, as well as Jerry Maguire and American Beauty.

After her choreography success, Abdul used her savings to make a singing demo. Although her voice was relatively untrained, her dancing performance provided the visual benefits for the MTV-drive pop music industry. She had vocal couches and producers to help with improving her sound. Her pop debut album Forever Your Girl was Billboard 200 album top 1 for ten weeks, and in total spend 64 weeks on the top. The album eventually was multi-platinum certified. In 1991 she won her first Grammy Award for the video “Opposites Attract.” Her next album Spellbound was also a major success. In 1991 she was honored with a star on Hollywood Walk of Fame.

Besides working on her music albums, Abdul also starred in the ABC TV show Touched By Evil, where she played a businesswoman who discovers that her boyfriend is a serial rapist. She took a break from performing as a musician but worked behind the scenes on several film and theater projects. In 2001 she produced drama series Skirts about a high-school cheerleading squad, but the show never aired.

In 2002 Abdul started to appear on the reality TV music competition show American Idol, as one of the three judges. She often had disagreements with co-judge Simon Cowell about his attitude towards contestants and at one point even wanted to leave the show. Despite their differences, Cowell convinced Abdul to stay on the show. Parallel to her work on American Idol, Abdul also started to work as a reporter for Entertainment Tonight. Cowell later invited her to be a guest judge on auditions of the UK talent shows The X Factor. She spent eight seasons on American Idol and left due to unsuccessful negotiations about her salary.

In 2011, Abdul started to serve as the lead judge and executive producer on CBS’ reality dance competition Live to Dance, but the show was canceled after one season. Abdul was also a guest judge on the 10th season of So You Think You Can Dance and later accepted an offer to be the judge on the show’s Australia edition.

Abdul is an observant Jew. She had her bat mitzvah in Safed, Israel in 2013, when she was 51. Abdul has stated that she is proud of her heritage. She is also a practitioner of Transcendental Meditation.

Abdul suffered from anorexia when she was younger. In 2005 she stated that she has reflex sympathetic dystrophy that causes chronic pain. Abdul loves dogs and on several occasions, has been actively involved with various charities. She raised awareness about National Guide Dog Month in 2009, to help people with blindness to have more independence with the help of guide dogs.