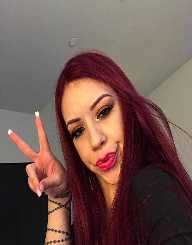 Born on November 20, 1994, Salice Rose is an American model and social media personality. Best known as Salsa Roja or the Popeyes Queen, she gained popularity with her postings on Instagram, Facebook, Twitter, and YouTube. She had over 4.8 million followers on Instagram and known for her enticing videos. With her attractive looks and eye-catching figure, it becomes difficult to overlook her; all one can do is to follow her to have more of such looks. Unlike other celebrities whose social media accounts are just one-way traffic with fans always making the comments; Salice is different as she does interact with her followers on everything she posts.

Salice Rose has kept all information about her family to herself, but it is nonetheless known that she has two other siblings. She was born in California, USA and lived most of her life there. She is of a Peruvian ethnicity. Salice liked to dance to her favorite music and loves to sing.

Salice Rose took social media by storm by with the display of her charming smiles and attractive face through the posting of videos and photos. However, it saw her videos work much for her that photos. She has tremendous followers on Instagram numbering about 4.8 Million, about 120,000 on Twitter,1.5 million fans on Facebook and also on Snapchat she is doing cool. With her interactive nature on social media, she always attracts new followers every day.

After posting the video, My Story, on Twitter, Salice Rose followers almost doubled and have since then maintained the standards intriguing her followers with interesting videos. Most of her videos are based on social problems and other challenges the youth goes through as they become adults and gives solutions to how to deal with them. She does this in a more friendly way and how she does that empathizing way make her relate to her targets well.

She also does this infusing some funny thing to make the videos attractive and create some sense of humor. Salice uses her social media accounts to promote apparels including clothes, T-shirt, and hoodies for some companies. Even though she has had several criticisms of living a fake life on social media, Salices does what she likes best and such critics had never had negative effects on her social media presence.