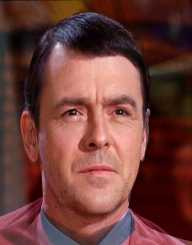 Best remembered for his role in the television and film series ‘Star Trek,’ Canadian actor James Montgomery Doohan was born on March 3, 1920, in Vancouver, British Columbia, Canada. He was the youngest of the four children of his parents William Patrick Doohan and Sarah Frances. Both his parents migrated to Canada from Bangor, County Down, Northern Ireland. His father was a licensed pharmacist and also doubled up as a dentist and a veterinarian. He was born in Belfast and was a member of the Pharmaceutical Society of Ireland. James Doohan’s mother was a homemaker.

Doohan studied at the Sarnia Collegiate Institute and Technical School (SCITS) after having relocated to Sarnia, Ontario, from his birthplace Vancouver along with his family. He was very proficient in science and mathematics during his high school days. In 1938, he joined the 102nd Royal Canadian Army Cadet Corps.

James Doohan joined the Royal Canadian Artillery during the beginning of the World War II. He was part of the combat battalion which participated in the Allied invasion of German-occupied France in the Normandy Landings on June 6, 1944, at Juno Beach famously referred to as the D-Day. In the ensuing battle, he was shot at several times and had fatal injuries on his chest and leg while leading a troop. A silver cigarette case in his shirt pocket miraculously saved him from a more serious bullet injury though he lost one of his fingers.

CAREER AS AN ACTOR

James Doohan returned to Canada once the war was over. He opted for further technical education immediately after his return. He joined a drama school in Toronto upon hearing a radio drama and realizing his potential in voice acting. He then earned a scholarship to the Neighborhood Playhouse in New York City, the United States of America for course duration of 2 years. There he found some of the illustrious names of the future acting world like Tony Randall, Richard Boone and Leslie Nielsen as his classmates.

He started his career as a radio artist in 1946, and since then he was involved in more than 4000 radio programs and around 450 television programs in a career spanning almost one and half decades. He frequently shuttled between Toronto and New York according to his work schedule during this period.

At the beginning of the 1960s, James Doohan completed his transition from the world of radio to the cellular world of Hollywood. At first, he appeared in some small film roles and also made some guest appearances on different shows such as ‘The Twilight Zone,’ ‘Gunsmoke’ and ‘Bonanza.’ He met Gene Roddenberry, the producer of the Star Trek film and television series.

Doohan auditioned for the role of a chief engineer of the USS Enterprise and tried different accents for it. Finally, both Roddenberry and Doohan agreed that it would be a French engineer. Doohan selected the name "Montgomery Scott" in memory of his late grandfather. Thus, he began appearing as Montgomery Scott, the French Engineer, in the most popular science fiction film and television series of the Star Trek franchise. The show was premiered on September 8, 1966, and became hugely popular during its syndication after the conclusion of its original run of three years.

The fantasy science fiction set in the background of the twenty-third century of the future had captivated the young and old alike with its story of a spaceship travelling through the uncharted territory of space confronting various challenges and experiencing different life forms en route. However, Doohan experienced difficulty in getting rid of his image of Scotty, the French engineer and found himself typecast in the character.

The Star Trek series fanned out to be a significant success for the franchise with a number of sequels in both film and television industry. Doohan, in spite of his typecast image of Scotty, managed to appear in some other projects as well. These include the likes of ‘Fantasy Island,’ ‘MacGyver,’ ‘Hotel’ and ‘Magnum P.I.’ He was also successful in landing a recurring role on the soap opera ‘The Bold and the Beautiful’ during the mid-1990s.

Having married thrice during his life, James Doohan had seven children. He married Janet Young in 1949 and divorced her in 1964 after having four children together. He married Anita Yagel on November 22, 1967, and divorced her eventually in 1972 without any issue. Her third marriage was with Wende Braunberger, then a 17-year-old fan of him. He married her on October 12, 1974. They together had three children.

Doohan died on July 20, 2005, at his Redmond, Washington home after having suffered the complications of pulmonary fibrosis.