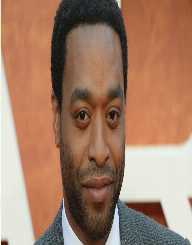 Chiwetel Umeadi Ejiofor was born 10th July 1977, to Arinze and Obiajulu. He was born in Forest Gate, London, England, and has a younger sister, Zain Asher, who has become a CNN correspondent.

In 1988, whilst on a family trip to Nigeria, Chiwetel Ejiofor and his father were involved in a car accident, which killed his father. Although Ejiofor was seriously injured, he made a full recovery.

Chiwetel Ejiofor  studied at Dulwich College, and also enrolled in the National Youth Theatre. He began acting in school productions. Chiwetel Ejiofor went on to begin study at the London Academy of Music and Dramatic Art, but when he was only approximately one year into his course, he was cast in one of Steven Spielberg’s plays, called Amistad.

Chiwetel Ejiofor is very talented and hasn’t been without work since he made his film debut in 1996. It was a television movie called Deadly Voyage. The year after, 1997, was when he made his stage debut in Spielberg’s production called Amistad.

He was cast in another film in 1999, called G: MT – Greenwich Mean Time, and in 2000, he took another stage role at the Royal National Theatre.

Chiwetel Ejiofor began receiving nominations and awards for the work he was doing; such was his talent.

His first leading role was in the movie; It Was an Accident, released in 2000. In 2003 he won a role in the hugely popular movie, Love Actually. 2003 was a busy year for Ejiofor, as he acted in stage productions as well as a radio production.

In the years that followed, Ejiofor continued to star in film, television and stage productions.

He has been in eleven television shows or films, and twelve stage productions.

Chiwetel Ejiofor has been nominated for many awards, and has won several. Some of his awards include:

2008:   Laurence Olivier Award for Best Actor (for his performance in Othello)

2008:   Appointed Officer of the Order of the British Empire by Queen Elizabeth II

Chiwetel Ejiofor  involves himself in various causes, and in 2015 he was awarded the Global Promise Award by the GEANCO Foundation for his charity work in Nigeria.

He also appeared in a video for the United Nations refugee agency, UNHCR, with other leading actors to help raise awareness of the global refugee crisis.