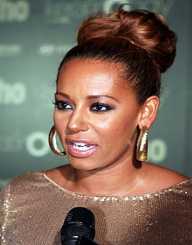 Melanie Brown is famously known as “Mel B.” She was born on May 29th, in 1975. She is celebrated for being a talented English singer. Besides this, she is also a songwriter, TV personality and an actress.

She rose to the limelight in 1994 after being the member of Spice Girls. Here, she earned the nickname “Scary Spice.” In her singing career, she joined forces with Missy Elliott and released “I Want You” in 1998.

This was a massive hit as it topped the U.K charts. As a TV personality, she has hosted a number of shows including The X Factor and America’s Got Talent.

Melanie Janine Brown was born on May 29th, in 1975. Her birthplace was in Harehills in Leeds. She is the daughter of Martin and Andrea Brown. Brown is the first cousin to the famed actor Christian Cooke.

Melanie Brown joined Intake High School where she studied performing arts while living in Leeds. This was before she tried out her luck in the entertainment industry.

Melanie Brown kicked off her career in the entertainment industry after auditioning for an advertisement she saw in the newspaper. She teamed up with a band called Touch. Brown later responded to another ad featured in The Stage magazine.

Other notable individuals that responded to the same advertisement included Victoria Beckham, Geri Halliwell, and Mel C. Out of the 400 women that auditioned, Brown, Beckham, Chisholm, and Halliwell were chosen.

Nevertheless, the group was devastated by the poor management from the group and that they were not being offered any contract. They broke off their deal with them.

Fortunately, for the group, the landed on another record with the Virgin Records. Soon, they released their first album called Spice in September 1996. This was a major hit. The album topped charts in over 17 countries.

Similarly, it was credited as certified platinum in 27 countries. Furthermore, the album sold about 30 million copies globally making it the biggest grossing girl group album in history.

The following year, the girls hit the headlines again with the release of their second album called Spiceworld. Hit singles that topped albums within this album were “Too Much,” and “Spice Up Your Life.” This album did not perform as the first album, but it was still regarded as a best seller since it sold over 20 million copies globally.

Later, in 1998, the Spice Girls went separate ways. It is from this time that Melanie Brown took off her solo career with the hit single “I Want You.” She had partnered with Missy Elliott and that her first single was a tremendous hit.

During the first week of its release, the song sold over 80, 000 copies. The hit song topped the U.K charts. Two years later in 2000, Melanie Brown released her first album called Hot. In 2005, she after that released L.A. State of Mind as her second album.

Aside from being famous in the music industry, Melanie Brown also garnered high acclaim on TV primarily for shows such as The X Factor and America’s Got Talent.

In 1998, Melanie Brown got engaged to Jimmy Gulzar, a Dutch drummer. Shortly after, Brown got pregnant in June of the same year. In September, the two exchanged rings. As a result of their union, Melanie Brown decided to change her stage name and adopted Melanie G. Unfortunately, it did not take time before the two divorced in 2000. Brown and Gulzar had one daughter.

Later on, Melanie Brown welcomed her second daughter with the relationship she had with Eddie Murphy. She was later married to Stephen Belafonte, a film producer in 2007. The two were blessed with a child in 2001. The two again divorced in late 2016.